Top Lee aides sit through hearings on their arrests

Top Lee aides sit through hearings on their arrests 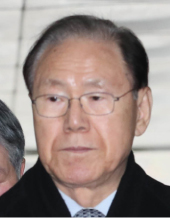 Two associates of former President Lee Myung-bak attended arrest warrant hearings on Tuesday over suspicions that they misappropriated funds of the nation’s main spy agency while working at the Blue House.

Kim Baek-jun, former general affairs secretary at the Blue House, and Kim Jin-mo, former civil affairs secretary to the president, each attended a hearing at the Seoul Central District Court. The rulings were expected later in the evening or early this morning.

According to the Seoul Central District Prosecutors’ Office, Kim Baek-jun was accused of receiving at least 400 million won ($376,364) from the National Intelligence Service (NIS) on several occasions after May 2008. The payments started when Kim Sung-ho was heading the agency and continued during the tenure of his successor, Won Sei-hoon, the prosecution said.

Kim Baek-jun was accused of receiving bribes and causing losses to the state. Kim’s lawyer said his client rejected the charges during the hearing.

Another hearing took place at the court for Kim Jin-mo. The former prosecutor was accused of receiving over 50 million won from the NIS. He was suspected of using the money to pay off a former public ethics auditor of the Prime Minister’s Office, who exposed the administration’s alleged surveillance of civilians.

He and his lawyers left the court after the hearing without talking to reporters.

The prosecution raided the homes of the two suspects and another Lee associate, Kim Hee-jung, last week. On Sunday, the prosecution asked the court to issue detention warrants for Kim Baek-jun and Kim Jin-mo.