Collaboration is key in mass start

Collaboration is key in mass start 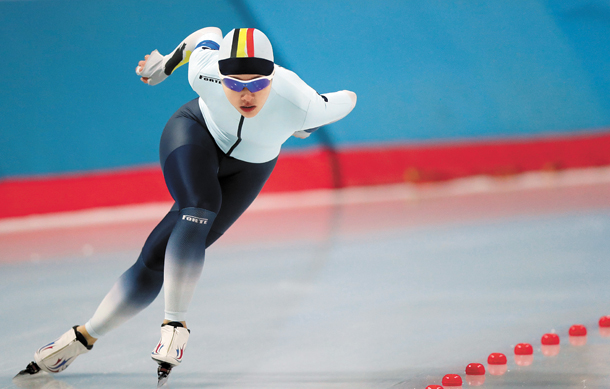 As the men’s and women’s mass start race will be returning to the Olympics for the first time since the 1932 Winter Games in Lake Placid, Kim Bo-reum is hoping the event will allow her to bag another gold medal for Korea.

Though Kim won a gold at the International Skating Union (ISU) World Single Distances Speed Skating Championships last season, she will have to overcome the Takagi sisters, who have been dominant this season in the ISU World Cup races, to win a gold at the PyeongChang Olympics.

Unlike the other speed skating races, where only two skaters race in each heat, the mass start race is like a short track race with all skaters racing 16 laps of the 400-meter track at the same time. Since Kim started as a short track speed skater, the addition of the mass start race at the Olympics means another opportunity to medal in PyeongChang.

Kim started short track speed skating in the fifth grade, but consistently failed to make the cut for the national team. Since short track has long been one of Korea’s strongest winter sports, it was harder for Kim to leave an impression at international or domestic events.

After Lee Seung-hoon, who also switched from short track to speed skating, won a gold medal in the men’s 10,000-meter race at the 2010 Vancouver Winter Olympics, Kim decided to make the same move. She switched to speed skating in May 2010.

Her decision to compete in a different sport turned out to be the right one, and she earned a spot on the national team within a year.

“Skating in a smaller circle a lot when I was a short track speed skater helped me race better in the mass start race,” Kim said.

Out of five ISU World Cup events during the 2016-17 season, Kim won twice. She also won gold at the ISU World Championships at the Gangneung Oval.

Unlike Kim, the Takagi sisters have a lot more experience speed skating, as they started even before elementary school. Of the two, Miho was the first to receive attention after competing at the 2010 Vancouver Winter Olympics while in middle school. Nana, the older sister, competed at the 2014 Sochi Olympics.

This season, Miho is on top, winning a gold in the 1,500-meter race at the fourth ISU World Cup event. She’s also become a threat to other skaters in the 3,000 meters and the team pursuit race. Nana has also had great results in the mass start, finishing second at the 2017 World Championships and wining a bronze at the third ISU World Cup event this season.

In the mass start race, the Takagi sisters are a serious threat, as collaboration and sacrifice are two important factors in the event. Normally, two skaters per country are allowed to compete in the event at the Olympics. The leading skater cuts a path through the pack with the second skater close behind them, looking for an opportunity to shoot around their teammate and take the lead.

During the 2017 Sapporo Asian Games, where each country was allowed to have three skaters compete in the mass start, the Japanese team showed great teamwork. Nana led the other two skaters - Miho and Ayano Sato - to win gold and a silver. Though Korea had two other skaters competing in the race with Kim, they failed to get past the Japanese team.

“The improvement of the Japanese skaters is a good motivator for me,” Kim said. “I’ll train harder so I don’t get caught up in their plan at the PyeongChang Olympics.”