Rookie Im Sung-jae picked up his first Web.com Tour victory in his first appearance during The Bahamas Great Exuma Classic at Sandals Emerald Bay on Tuesday. 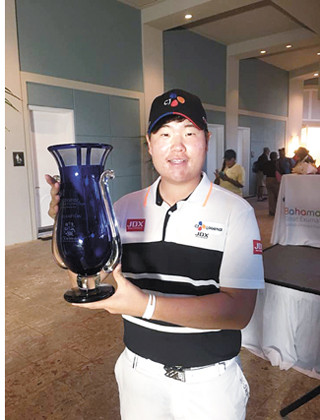 After playing the remaining holes from the third round early Tuesday morning, Im played a bogey-free round of seven under par, 65, in the final round to finish four shots ahead of Carlos Ortiz of Mexico. Im finished the tournament at 13 under par.

“There was a lot of wind today, so I tried to hit punch shots,” Im was quoted as saying on the Web.com Tour website. “At first, they weren’t working, but I stuck with it and finally started hitting them low, which led to some birdie chances.”

Though the Web.com Tour is a second-division PGA tour, Im’s victory means a lot, as he became the second-youngest golfer, after Jason Day of Australia, to win on the Web.com Tour at age 19.


“I’m so happy,” Im was quoted as saying. “Everyone told me how tough it was to win on the Web.com Tour. I never expected to win this quickly, but I’m so happy about this victory.”

Im became the 16th player to win the event in its first appearance and the seventh Korean-born golfer to do so.

“I’m so happy to join them as a champion and hope someday to be on the PGA Tour with them,” Im was quoted as saying. 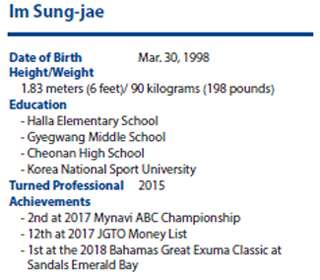 Rather than playing in the JGTO’s season finale, Im left to the United States to play in the Qualifying School, where he finished runner-up. Though the 2017 season allowed Im to make a significant improvement in his golfing career, he didn’t have a professional win on his resume. But now he does with the Web.com Tour debut event.

“Jeju Island is my hometown,” Im was quoted as saying. “When I was a kid, I played the CJ Nine Bridges Golf Club. I want to have a chance to play that event someday.”

Aside from earning full status on the PGA Tour, Im is very likely to make his PGA Tour debut at the CJ Cup. Since CJ is the major tournament sponsor and Im’s main sponsor, he is likely to receive a sponsor exemption even if he doesn’t qualify.