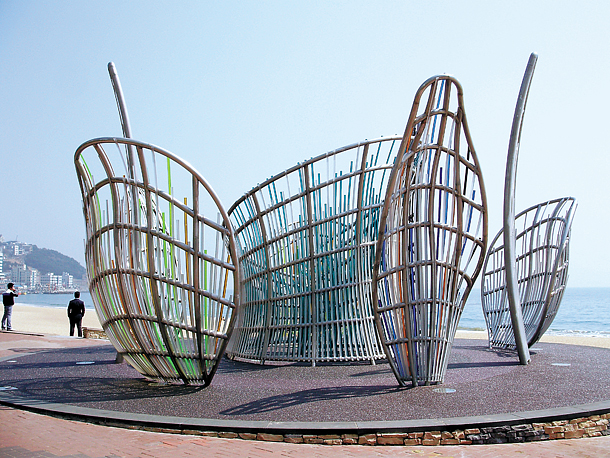 This 2011 file photo shows the posthumous sculpture “Chamber” by the renowned American artist Dennis Oppenheim (1938-2011), which stood at Haeundae Beach in Busan. The sculpture was demolished by the Haeundae District Office last month without any notice to the late artist’s family. [BUSAN BIENNALE ORGANIZING COMMITTEE]

Shocking art lovers and critics, a sculpture by renowned American artist Dennis Oppenheim (1938-2011), which had stood on Haeundae Beach in Busan since 2011, was demolished by the Haeundae District Office last month, without any notice to the late artist’s family.

The Tourism Facilities Management Center team of the district office confirmed on Wednesday that it dismantled the sculptural installation work titled “Chamber” during the week of Dec. 11 to 17, after which they discarded all the parts as industrial waste.

The sculpture was installed in early 2011. The “Chamber,” a work comprised of metallic flower petals and leaves each standing 6 meters (19.7 feet) tall on a surface area of about 64 square meters (688.9 square feet), was completed after Oppenheim’s death on Jan. 21, 2011. It has been dubbed Oppenheim’s last piece, and the artist’s family members visited Korea in March 2011 to see the work.

The idea of installing a sculpture near Haeundae Beach was conceived by the Haeundae District Office as a place to attract tourists looking for a spot to take photos. The district office entrusted the process of choosing the artist and the work to the Busan Biennale Organizing Committee, which held an open call for entries. Oppenheim, who had participated in the 2010 Busan Biennale, entered himself into the contest.

“The Haeundae District holds the rights to the work, since it paid for the photo zone [project],” Moon Ju-hwa of the Busan Biennale told the Korea JoongAng Daily on Wednesday.

She further explained that Biennale officials had not been informed of the demolition and they had only found out two days ago, when a reporter from local newspaper Busan Ilbo called them for clarification.

“But the intellectual rights of the work belongs to the family of the late artist, who were not informed of the dismantling of the work,” she said.

“The district office failed to come to us or the family for advice or discussion on how to handle [the situation] before taking the work down.”

The Haeundae District Office said the sculpture had been seriously damaged by multiple storms that had hit the beaches of Busan over the last seven years. Neither the district office nor the Biennale committee took on the role of preserving the work after the installation was complete, citing each other as the source of responsibility.

While the district office argued that the Biennale committee should have been the ones to look after the work, the Biennale stated that their role ended the moment that the work was put in place.

“When the members of the Biennale committee came to look at the sculpture a year ago, they said that the sculpture looked ugly, and alluded that it should be taken down,” said Ham Shim-yeoung of the Haeundae District Office. “Although we didn’t discuss it with the family, it clearly had no artistic value, which is why we decided to take it down.”

“What should never happen, happened, in a word,” said Hong Kyoung-han, art critic and art director of the upcoming Gangwon International Biennale. “It’s the result of total ignorance. It is even more shocking than the 2010 case when the then-administration demolished murals by an artist at the Dorasan railway station [in Gyeonggi] without the consent of the artist. [In that case], the artist sued the government and won the case. Well, we might see an international lawsuit.”

In the case of the Dorasan Station mural, the Supreme Court ruled that, although the government has the ownership of the murals, the demolition of them infringed on the artist’s moral rights as a creator of the works.

“As for the public sculpture ‘Amabel’ by the famous artist Frank Stella standing in front of the Posco building [in southern Seoul], the steelmaker once attempted to relocate it indoors due to complaints by some Seoul citizens [that the sculpture was ugly]. But, at the artist’s opposition, the steelmaker gave up the plan,” Hong said. “Artists are sensitive, even to relocation of their works. ‘Chamber’ is Oppenheim’s posthumous work, so it has even more of a special meaning.”

“The transformation or partial destruction of an artwork [without the consent of the artist] comes under the infringement of the artist’s rights of integrity among the moral rights, as an artwork partly changed can damage the artist’s philosophy and reputation,” explained Koo Bon-jin, a lawyer whose expertise is in art law.

“As for total demolition like the Busan case, experts’ views are mixed,” he continued. “Still, in my opinion, it is infringement on the rights of integrity. In Norway, when an artwork should be demolished for unavoidable conditions, the artist should be informed within a certain period of time. Korea needs to have a similar regulation.”