CICI honors cultural connectors : Annual awards are given to those who promote Korea abroad

CICI honors cultural connectors : Annual awards are given to those who promote Korea abroad 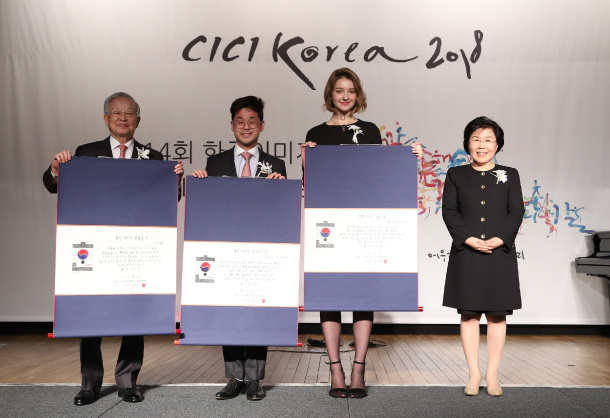 The Korea Image Award ceremony was held on Jan. 16 at the InterContinental Seoul COEX in southern Seoul, hosted by the Corea Image Communication Institution (CICI). From left stands Sohn Kyung-shik of CJ Group, Joachim Son-Forget and Angelina Danilova, the awardees of the event. [CICI]

Korea wrote another significant chapter in history last year with the impeachment of former President Park Geun-hye followed by the inauguration of President Moon Jae-in in May. The country has another historical moment on its hands with the upcoming 2018 PyeongChang Winter Olympics.

Celebrating those who have brought Korean culture to the world, the Corea Image Communication Institution (CICI) held its annual Korea Image Awards on Jan. 16 to honor people who have raised awareness of Korea in 2017.

The Harmony Ballroom at the InterContinental Seoul COEX in southern Seoul, was filled with some 500 leaders from Korea and around the world, including former Prime Minister Han Seung-soo and ambassadors to Korea. 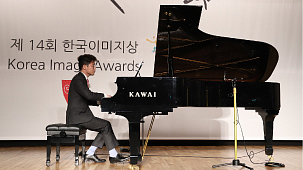 Joachim Son-Forget plays the piano at the CICI award ceremony. He is known for his skills on the harpsichord, and has held charity concerts in Paris and Geneva. [CICI]

This year’s Korea Image Stepping Stone Award, which is given to individuals, corporations or objects that have spread the image of Korea to the world, went to CJ Group for “heightening the image of Korea through various means such as film, food and dramas,” according to the organization. Sohn Kyung-shik, president of CJ Group, received the award on behalf of his company.

“CJ Group has endeavored to spread Hallyu [Korean Wave] to the world,” said Sohn while accepting the award. 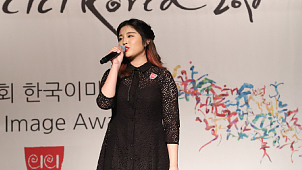 “We’ll continue with our efforts to place Korean culture deeper within the hearts of people from all around the world, through better products and services.”

The Korea Image Stepping Stone Bridge Award, given to a foreign individual who has acted as a bridge between Korea and the world, was given to Joachim Son-Forget, the first Korean-born member of the National Assembly of France. Son-Forget currently represents French citizens living in Switzerland and Liechtenstein at the National Assembly, and also holds degrees in cognitive sciences and medicine.

Son-Forget was born in Korea but was adopted by a French family at a young age.

In a press briefing prior to the ceremony, he acknowledged that his Korean birth and French upbringing has become a privilege for him to bounce between the two countries, and will help him bridge the two cultures.

“CICI is making a great effort in trying to get Korea out into the world,” said Son-Forget.

“I hope this will become a chance for me, as a French person, to get to know Korea more and help the world know more about it, too. It’s more meaningful to me because I was born in Korea.”

Last but not least, the Korea Image Flower Stone Award, given to people who help Korean culture grow around the world, was given to Russian social media star Angelina Danilova.

Danilova is a young Russian artist who lives in Korea, and shares her love for the Korean culture on her widely popular social media accounts.

Through posting updates about her everyday life in Korea and the beauty of the culture mostly to Instagram, Danilova has promoted Korean culture to a global audience, thereby “allowing young people to learn about Korea and Korean culture through the various content she shares.”

“It has been my dream to come to Korea [ever since] I found out about the culture,” said Danilova after receiving the award.

“When I was invited here through an amazing opportunity, I just had to say yes. I am so happy that I came.”