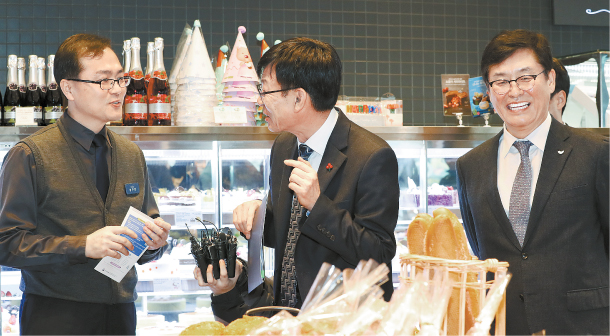 Kim Sang-jo, chairman of the Fair Trade Commission, center, speaks with a Paris Baguette franchise owner, left, as Kwon In-tae, chief executive of Paris Croissant, looks on at a bakery in Sejong on Wednesday. Paris Croissant is the owner of Paris Baguette. The Labor Ministry fined the company 16.2 billion won ($15 million) last month for failing to comply with a government order to directly hire bakers who were working at Paris Baguette but dispatched by contractors. The government said it was illegal for Paris Baguette to give orders to bakers when they were technically hired by contractors. Employing those bakers is estimated to cost the company 60 billion won. Kim on Wednesday was touring several franchise stores to talk with owners about the difficulties they will face this year, including paying their workers a higher minimum wage. [YONHAP]