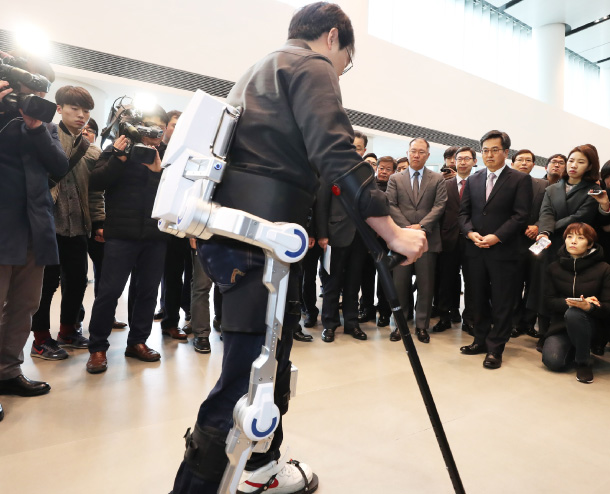 Hyundai Motor announced that it will invest 23 trillion won ($21.5 billion) in five new industries including robotics and artificial intelligence in the next five years, which will create 45,000 jobs.

This is the first time that Korea’s largest automotive company has officially included robotics and artificial intelligence in its future business plan.

The other areas that the automaker is planning to invest heavily in are electric vehicles including hybrids and fuel cells; smart cars such as autonomous vehicles and connected cars; future forms of energy and fostering start-ups.

The company vowed to lead innovation that comes with changing industrial trends, such as vast connectivity, aging populations, technology convergence and the so-called sharing economy.

The unveiling of the plan came in a meeting between the group’s vice chairman and heir apparent Chung Eui-sun and Finance Minister Kim Dong-yeon on Wednesday.

In the meeting, Kim urged business conglomerates to invest in new industries and create new jobs, as they are the center of innovative growth.

“I believe that not only start-ups, SMEs and medium-sized businesses are important pillars of the innovative growth but also conglomerates,” the Finance Minister said, adding that the government will help foster new industries in ways including deregulation.

“This year we are maintaining 3-percent growth and putting in efforts so the results of the growth will be spread around evenly,” Kim said. “And to maintain growth [to reach gross national income per capita] of $30,000, it is most important to speed up innovative growth.”

Kim said one of the characteristics of the automotive industry is that paradigms shift faster than in other industries. The industry also leads such paradigm shifts for related industries.

“Convergence with new economic players is particularly important because of the impact the automotive industry has on other industries and companies,” Kim said. He stressed the importance of Hyundai Motor’s cooperation with smaller business partners.

“I was very impressed to see the hydrogen-fueled vehicle and autonomous vehicle,” the Finance Minister said. “And I hope that [Hyundai Motor] will actively lead such technology development.”

Chung responded that the hydrogen vehicle is actually the result of cooperative work with business partners, stressing that his company believes in “shared growth.”

“Today [Finance Minister Kim] has ridden in the Nexo, which is a vehicle that is made with the cooperation of 110 part suppliers,” Chung said. “The development of future businesses such as hydrogen fueled-vehicles and autonomous vehicles is not only an opportunity for business partners to advance but also contributes to creating jobs.”

He said during a recent visit to the Consumer Electronic Show in Las Vegas, he witnessed rapid changes in global trends.

“Although some believe automation in factories will shrink jobs, I believe it is possible to create jobs in new technologies from software development and coding,” Chung said.

“That will also create new business partners on top of existing partners and for that reason we will establish a cycle in which aggressive investment in new technologies will lead to hiring of new talents.”

Chung stressed that Hyundai Motor will also be looking at promising start-ups around the world.

Hyundai Motor said by 2025 it will be producing 38 environment-friendly vehicles including 14 types of electric cars and two hydrogen-fueled vehicles. On smart cars it plans to test an autonomous vehicle in 2021 and commercialize it in 2030. In order to do that, it will be expanding its investments in advanced core technologies.

On robotics and artificial intelligence, the company plans on securing global technology for wearable robotics such as exoskeletons that it could commercialize as early as this year and create a strategic alliance with companies both home and abroad with AI technologies.

On future forms of energy, the company said it plans to expand its research on next generation batteries and hydrogen.

Hyundai Motor in fostering promising start-ups and will be creating an innovative ecosystem in the mobile and artificial intelligence areas as well as managing an AI fund worth 50 billion won.

The government outlined its own measures to help the advancement of such technologies including expanding subsidies for environmentally friendly vehicles. Last year, the budget for such subsidies was 196 billion won and this year it has been increased 30 percent to 255 billion won.

The government also said it will increase the number of hydrogen fuelling stations through investments from public companies as well as encouraging private investors to participate. The goal is to reach 60 such stations by 2022 with eight installed along highways within this year.

This is the second meeting that Finance Minister Kim has had with a leading Korean conglomerate.

In December Kim met with LG Group Vice Chairman Koo Bon-joon, and the company announced investments of 19 trillion won this year and the hiring of 10,000 employees along with the creation of an 850 billion won fund to be used with partners.