‘No government policies can defeat the market forces’

‘No government policies can defeat the market forces’ 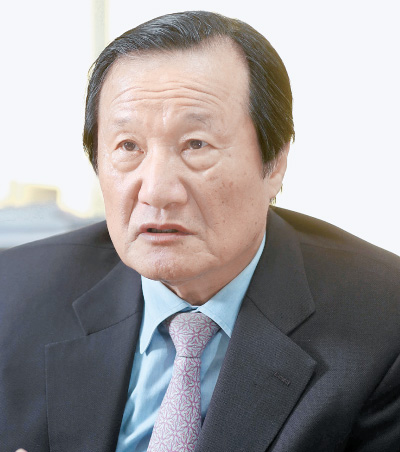 Yoon Jeung-hyun, former finance minister, navigated the aftermath of the financial crisis in 2009. After resigning in 2011, he established an economic research institute.

The JoongAng Sunday sat down with the former finance minister to discuss the Moon Jae-in administration’s economic policy.

Q. It has been six years since you left your public servant position. How have you been?

A. I am living a free life after having stepped back from my official job. I think junior colleagues will try their best to run this country’s economy, but I feel saddened about the current state of the economy.

How do you assess the economy?

The country is entangled with good and bad factors. The consensus is that semiconductor and petrochemical industries will enjoy their heydays for one or two more years. But this could mislead people. The projected growth of 3 percent growth is not sufficient to solve the problems facing the country.

What are the major risks this year?

Trading conditions got worse as Korea and the United States began talks to revise the terms of the bilateral free trade agreement. Geopolitical tension still exists because of the potential conflict with North Korea and China. Global commodity prices keep rising, along with the key benchmark interest rate around the world. Under these circumstances, the government allocated 130 trillion won ($120 billion) for welfare. I’m not sure whether the government could cover that amount under the current economic system.

Analysts say that the domestic market has yet to be recovered. What do you make of this view?

Corporate investment is the key component to driving domestic consumption. But the government has stirred up anti-corporate sentiment, which holds back corporate players to make large investments. The country depends on the money that big companies earn abroad. The government or the National Assembly are unable to draw money. We should solve this problem first.

But doesn’t the view lean too much towards the corporate side?

Corporate growth leads into the country’s economic growth. We need policies that can promote entrepreneurship. I always appeal to the government about this but they hardly respond.

The real estate market seems also unstable. What do you see as the cause and solution?

The previous administrations all failed to address the overheated property market and this is because they ignored free-market principles. The Moon Jae-in administration only focuses on reining in the demand side of the housing market while not caring about the supply side. Instead of churning out stopgap measures, the government should supply rental houses.

What is your view on the key concepts of J-nomics, or the Moon Jae-in government’s economic policy?

No government policies can defeat the market forces. The economic policy should be devised in a way that balances supply, demand and labor parties. But so far, the Moon Jae-in government has tilted too much towards the labor side. And that disappoints companies. The most urgent matter is to settle the merit-based salary system. One thing that the Park Geun-hye government did well was adopt the performance-based wage system in the public sector.

What do you think of the notion of income-led growth, a key objective of the Moon government?

It puts the cart before the horse. The economy should grow first to set the base for higher salary. But the concept lacks the linkage to how income can be raised before the economy expands. And if income rises without any economic growth, it should depend on government-led welfare.

The discussion of raising taxes for expanded welfare triggers controversy. What is the right way to go?

The public wants more welfare. But we should acknowledge that welfare without tax increases is not possible. The government should be candid about this and convince people to accept a compromise. We can gradually raise the tax burden ratio to the OECD average of 25 percent, from the current 19.3 percent, by increasing the rate 0.5 percent annually. The government could gradually reduce different tax exemptions while raising value-added taxes by 1-2 percent.

Our aging society is a hot-button issue. How should the government respond to the growing number of older adults?

Korea is becoming an aging society 10 years faster than Japan, which poses a serious challenge. We should come up with more comprehensive plans. We need to establish a body dedicated to managing demographic issues and accept immigrants.

The country was also hit by China’s retaliation over the installation of the Thaad system.

China’s restriction was really irrational and unfair. I wonder why the government was unable to have a stronger voice. We should have referred the case to the World Trade Organization. We need to bear short-term difficulties to avoid long-term suffering.

What should be the focus of our economic policy?

The economy is both cyclical and structural. But since presidents only have five-year single terms, each administration tends to only pay attention to cyclical issues. The fundamental restructuring needed typically goes unnoticed or undone.

What kind of advice do you want to give Moon?

In one word, respect. Respect the market economy built on capitalism. World history teaches us that policies should be aligned with the system we live in. We need strong measures to promote entrepreneurship and enhance competitiveness.