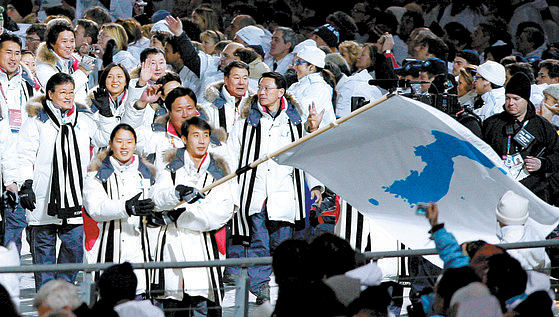 North and South Korea march together during the opening ceremony of the 2006 Winter Olympics in Turin, Italy. [YONHAP]

North and South Korea agreed to form a joint women’s ice hockey team for the PyeongChang Winter Olympics next month and march side-by-side during the opening ceremony on Feb. 9 behind a white flag with a blue shape of the Korean Peninsula in the middle, a historic symbol of reconciliation after a year of rising tensions over the regime’s missile and nuclear tests.

The International Olympic Committee (IOC) and the national Olympic committees of both countries will finalize the agreement through further consultations, said South Korea's Unification Ministry, which handles inter-Korean affairs.

The ministry briefed local reporters about the latest inter-Korean dialogue on North Korea's participation in the Games. The working-level meeting was held Wednesday at Peace House, a South Korea-controlled building on the southern side of Panmunjom, which straddles the border.

The third round of inter-Korean dialogue this month came after both sides agreed on Jan. 9, during the countries' first high-level meeting in over two years, to hammer out details of North Korea's participation in the Winter Games through a series of talks among representatives of lower ranks.

The two countries have combined teams only twice in international competitions before -- the World Table Tennis Championship in February 1991 and the FIFA World Youth Championship in July 1991 -- but never did so for the Olympics.

The last time the two Koreas made a joint entrance for an international sport event was in February 2007, during the Asian Winter Games in Changchun, China.

According to a joint press release provided by the Unification Ministry, both countries will decide whether any other North Korean athletes will compete in the Winter Games after consultations with the IOC this Saturday.

North Korea will send some 230 members of a cheerleading squad and 30 members of a Taekwondo demonstration team as part of a larger delegation that will include high-level government officials, athletes, reporters and orchestra members.

The North Korean cheerleaders will be rooting for both Koreas and hold joint cheering sessions with their South Korean counterpart. The Taekwondo demonstrators will perform in both Seoul and Gangneung, one of three venues in Gangwon where the Olympics will be held.
The delegations of athletes, cheerleaders, taekwondo demonstrators, reporters and officials of its national Olympic committee will travel into the South through a road that crosses the border near the west coast.

The athletes will arrive on Feb. 1, while the rest will arrive six days later. Their return date to the North will be decided upon mutual agreement, according to the joint press release.

A team of inspectors checking accommodations for the North Korean athletes, cheerleaders, Taekwondo performers and reporters will arrive next Thursday, staying until Jan. 27.

Another delegation of some 150 people, including athletes, cheerleaders, artistes, reporters and representatives of North Korea’s national Paralympic committee, will arrive in South Korea to attend the Paralympics, though it was unclear whether the group would be composed of different members than that of the Olympics.

Both Koreas will hold a joint cultural event in the North’s Mount Kumgang before the PyeongChang Winter Olympics kick off on Feb. 9. North and South Korean ski athletes will train together at the North’s Masikryong Ski Resort, as well.

South Korea will send a team of inspectors to North Korea next Tuesday, staying until Thursday to check the facilities.

Mount Kumgang, just north of the inter-Korean border on the east coast and the second tallest mountain in North Korea, was once a linchpin of South-North cooperation when it opened a tour zone in 1998, attracting some 2 million South Koreans until 2008, before the local government banned all tours following the North's fatal shooting of a 53-year-old South Korean tourist that July.

The Masikryong Ski Resort, a pet project of North Korean leader Kim Jong-un, opened in 2014 in the hopes it would attract foreign tourists and hard currency for the cash-strapped regime. According to North Korea watchers, the luxurious project sits virtually deserted today.

Attending from the South Korean side in the latest working-level meeting Wednesday were Vice Unification Minister Chun Hae-sung; Ahn Moo-hyun, deputy director general of the Prime Minister's Office; and Kim Ki-hong, vice president of Games planning for the PyeongChang Organizing Committee for the 2018 Olympics and Paralympic Winter Games.

Both countries will have to iron out their differences before Saturday, when they meet at the IOC headquarters in Lausanne, Switzerland, to discuss North Korea’s participation in the Winter Games with IOC President Thomas Bach.