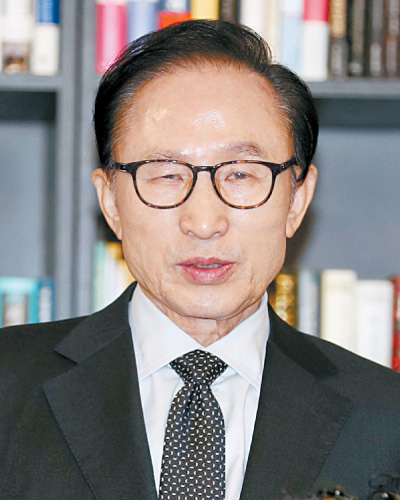 Former President Lee Myung-bak said Wednesday that investigations into alleged corruption in his administration are political payback to hold him accountable for the suicide of his predecessor, Roh Moo-hyun.

Lee held a press conference at his office in southern Seoul Wednesday evening and read a statement addressing prosecutorial probes into his associates. Speculation is growing that Lee will soon be investigated for corruption.

Prosecutors took into custody former presidential secretaries Kim Baek-jun and Kim Jin-mo earlier in the day on allegations that they had misappropriated funds from the National Intelligence Service (NIS) while serving in the Lee administration.

“Many people see the prosecution’s investigations - which are conducted under the slogan, ‘Eradicating accumulated evils’ - as a political campaign to annihilate the conservatives and political revenge for President Roh Moo-hyun’s death,” Lee said during the press conference.

Roh killed himself in 2009 during a probe that his family received bribes. President Moon Jae-in is Roh’s longtime friend and political ally.

Lee said he is ultimately responsible for everything that happened during his presidency. The press conference, aired live on television, reflected the former president’s sense of urgency as key members of his administration are turning into cooperating witnesses for the prosecution.

The Seoul Central District Prosecutors’ Office is investigating suspicions that officials of the Lee Blue House took large sums of money from the NIS. Kim Baek-jun, former general affairs secretary at the Blue House, and Kim Jin-mo, former civil affairs secretary to the president, were detained early Wednesday after a local court issued warrants to prosecutors.

Kim Baek-jun, who worked for Lee since the 1970s, was accused of receiving at least 400 million won ($373,832) from the NIS starting in May 2008. Kim Jin-mo was suspected of receiving over 50 million won from the NIS and using it to pay off a former public ethics auditor in the Prime Minister’s Office, who exposed the administration’s alleged surveillance of people.

The prosecution has up to 20 days to interrogate the two suspects under detention. Speculation is growing that the focus will soon shift to Lee, as prosecutors gather testimony from his former aides. On Friday, the prosecution raided the residences of Kim Baek-jun, Kim Jin-mo and Kim Hee-jung, the presidential secretary for personal affairs, and questioned all three.

The prosecution also questioned former NIS heads from the Lee administration, Kim Sung-ho and Won Sei-hoon, about the suspicions. Kim Ju-seong, who headed the NIS’s planning and coordination division from March 2008 through September 2010, and his successor, Mok Young-min, were also summoned several times over allegations that they delivered the money to Blue House officials.

Sources said Kim Ju-seong told the prosecution details of the NIS’s payment to Kim Baek-jun. He reportedly told prosecutors that Kim Baek-jun made his first demand for money in March 2008.

Then-head of the NIS, Kim Sung-ho, sanctioned the payment, and Kim Ju-seong arranged the deal, ordering a junior budget officer of the NIS to hand-deliver the money to Kim Baek-jun.

The meeting took place at an outdoor parking lot of the Blue House, Kim Ju-seong told the prosecution.

According to the sources, Kim Ju-seong received another request of money soon after the first payment. He paid a visit to the Blue House and had an exclusive meeting with Lee in the presidential office, he reportedly told the prosecution.

“I told Lee about concerns that troubles may arise from such practice,” Kim was quoted as telling the prosecution. Kim reportedly said Yu Woo-ik, then-presidential chief of staff, arranged the meeting. Yu also admitted to the prosecution that Kim had an exclusive meeting with the president, sources said.

Lee’s office challenged those accounts. In a press release on Tuesday, it said it was a groundless fiction that Lee met with Kim Ju-seong, noting that Kim’s rank was not high enough to have an exclusive meeting with the president.

According to an exclusive report by the JoongAng Ilbo on Wednesday, Kim told the prosecution that tens of millions of won were changed into dollars and sent to the Blue House shortly before Lee’s visit to the United States in October 2011.

At the time, Lee visited Washington for a summit with U.S. President Barack Obama and gave a speech before Congress. He also visited Chicago and Detroit during the six-day trip.

The sources said Kim told the prosecution that he made the currency exchange.