North to send 230 cheerleaders to South

North to send 230 cheerleaders to South 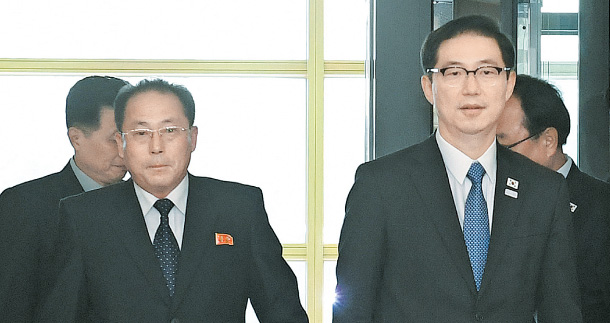 North Korea proposed to send nearly 230 members of a cheerleading squad to the South next month for the PyeongChang Winter Olympics, as part of a larger delegation that will include high-level government officials, athletes, taekwondo demonstrators, spectators, reporters and orchestra artistes.

South Korea’s Unification Ministry, which handles inter-Korean affairs, briefed local reporters about the latest inter-Korean dialogue on North Korea’s participation in the Games, which was still ongoing as of press time Wednesday near the border separating the two countries.

Pyongyang also said it was willing to send a delegation for the Paralympics, though it was unclear whether the group would be composed of different members than that of the Olympics.

The delegations of athletes, cheerleaders, taekwondo demonstrators, reporters and officials of its national Olympic committee were asked to cross into the South through a road penetrating both countries near the west coast. On Monday, during talks for its artistes, the North had asked Seoul to allow 140 members of its Samjiyon Orchestra to cross through the heavily fortified Panmunjom truce village, a highly rare move with very few precedents.

It is unknown how Seoul specifically replied to the suggestions Wednesday. On the Panmunjom offer, South Korea is known to have responded that a final decision was forthcoming.

According to the Unification Ministry, key agendas discussed in the working-level meeting Wednesday included the size of North Korea’s delegation, the delegation’s travel route, a joint cultural festival at the North’s Mount Kumgang, usage of the North’s Masikryong Ski Resort, a combined women’s ice hockey team and a joint entrance to the Olympic opening ceremony.

Mount Kumgang, just north of the inter-Korean border on the east coast and the second tallest mountain in North Korea, was once a linchpin of South-North cooperation when it opened a tour zone in 1998, attracting some 2 million South Koreans until 2008, when the local government banned all tours following the North’s fatal shooting of a 53-year-old South Korean tourist that July.

The Masikryong Ski Resort, a pet project of North Korean leader Kim Jong-un, opened in 2014 on the hopes it would attract foreign tourists and hard currency for the cash-strapped regime. According to North Korea watchers, the luxurious project sits virtually deserted today.

The latest inter-Korean discussions were held at Peace House, a South Korea-controlled building on the southern side of Panmunjom, which straddles the border. The third round of inter-Korean dialogue this month came after both sides agreed on Jan. 9, during the countries’ first high-level meeting in over two years, to hammer out details of North Korea’s participation in the Winter Games through a series of talks among representatives of lower ranks.