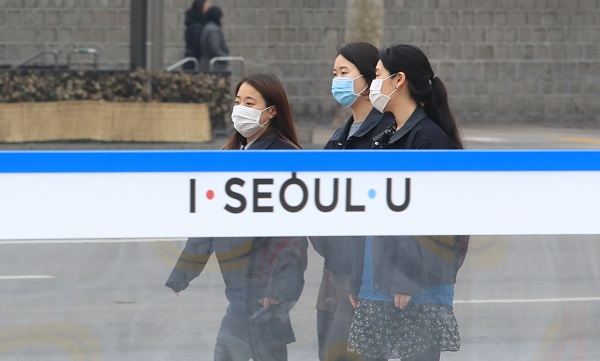 Lawmakers of the opposition and ruling parties criticized Seoul Mayor Park Won-soon for what they called Seoul’s waste of tax money on free public transportation, provided three times this week to encourage commuters to leave their cars at home as fine dust in the air shot to unhealthy levels.

“The Seoul city government is using the citizens’ tax money to provide free public transportation, a policy that has no effect,” said main opposition Liberty Korea Party Rep. Lim Lee-ja in a press release on Wednesday. “Additionally, Seoul city government said it is paying for the free public transportation via natural disaster funds, but fine dust doesn’t count as a natural disaster according to the Framework Act on the Management of Disasters and Safety. The policy’s legality will have to have to be determined, as well as whether or not it is a mere populism policy with the upcoming local election in mind.”

Seoul launched on Monday, Wednesday and today its emergency fine dust reduction system, whereby it issues a ban on city government officials’ cars with either odd- or even-number license plates, depending on the day, closes down parking lots for public vehicles, reduces operation at a dozen public factories and provides free public transportation during rush hours.

The Seoul Metropolitan Government estimates that it costs 4.8 billion won ($4.5 million) to provide free public transportation during rush hours in a day.

“Seoul had better stop its 10 billion won [$9.4 million] populism policy,” said opposition People’s Party leader Ahn Cheol-soo during a party meeting on Wednesday. “There is no causal relation between the number of cars on the road and the level of fine dusts in the air. Park had better come up with a more creative solution that addresses the core reason for the problem.”

“Free public transportation is not a solution for safeguarding the health and well-being of the residents,” the Democratic Party Rep. Park Young-sun, also a contender for Seoul mayor, wrote on her Facebook account Wednesday. “We need to consider all possible options on deck, and also listen to what NASA has pointed out as the main reasons behind the fine dust problem here, which are not all China-borne.”

Although fine dust has been a recurrent issue in Korea, especially during the winter and spring seasons when yellow dust flies in from China, which experts say is one cause in addition to domestic causes, Monday was the first time the city government’s system was launched since its creation last July.

The system is launched whenever two conditions are met: when there is more than an hourly average of 50 micrograms of PM2.5 fine dust particles per cubic meter of air from 12 a.m. to 4 p.m. on a day, and when the forecast for the next day, measured at 5 p.m. on the day, exceeds 50 micrograms.

The daily average of PM2.5 in Seoul on Monday was 50 micrograms and on Wednesday was 91 micrograms, according to Korea Environment Corporation.

Mayor Park responded to the criticisms on Wednesday.
“What is 4.5 billion won to you if you can save lives?” he said during a press briefing at the Seoul City Hall on Wednesday. “Did you not see the OECD report that said as many as 17,000 died in 2010 because of respiratory failures over the fine dust problem, and that as many as 52,000 are projected to die because of fine dust by 2060?

“This is a natural disaster and the lives of Seoul citizens are on the line,” he said. “And the money is not going anywhere but into the pockets of citizens who are getting the free rides on buses and subways. The city government is not using public funds in a reckless manner — it has set a budget of 30 billion won this year on the policy.”