Two former table tennis players from Seoul and Pyongyang who forged a historic inter-Korean team back in 1991 are likely to be reunited in March, as the North on Wednesday vowed to send a delegation to the PyeongChang Paralympics in South Korea. 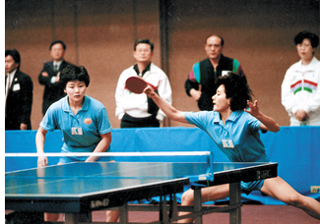 Li and her South Korean partner Hyun Jung-hwa played the women’s doubles together at the 1991 World Table Tennis Championships in Chiba, Japan, and grabbed the gold medal in the women’s team event over China.

The rare collaboration of the two countries in sports was significant as Seoul and Pyongyang are still technically at war as the 1950-53 Korean War ended in a truce, not a peace treaty.

It would mark their first meeting in 27 years if Li joins the North Korean delegation to the upcoming Paralympics. The 2018 Winter Paralympics will be held in Pyeongchang, 180 kilometers (112 miles) east of Seoul.

Due to the political tension between two Koreas, the two table tennis players have never met each other since the 1991 event.

“I will visit her no matter what happens [if Li visits Pyeongchang],” Hyun said. Hyun visited Pyongyang in 2005 to mark the fifth anniversary of the historical joint declaration signed by two Koreas, but failed to meet Li.

Hyun also participated in the 2012 London Olympics as South Korean head coach, but departed Britain for personal matters before Li arrived there for the following Paralympics.

Most recently, the two had a chance to be reunited in Incheon, just west of Seoul, during the Asian Games in October 2014. Hyun had been named mayor of the athletes’ village but a drunk-driving accident forced her to resign. Li had been scheduled to visit for the Asian Para Games but sustained serious injuries in an auto accident late September and couldn’t recover in time for the trip.

After insisting on sending a delegation of athletes to February’s 2018 Winter Games earlier this month, North Korea on Wednesday offered to take part in the Paralympics to be held the following month.