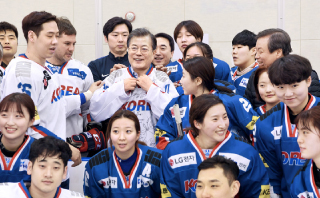 “May God preserve our country, our long-living homeland!” In February 2017, the Korean national women’s ice hockey team sang the national anthem at the Sapporo Asian Games in Japan. The players were in tears. For the first time, the South Korean team defeated China after 10 shootouts. They were more emotional than simply celebrating the victory. They are the only female national ice hockey team since 1998. I was also overwhelmed. Can they sing the Korean anthem in PyeongChang again?

“It is the first time for the women’s ice hockey team to compete in the Olympics, and it could be the last. We have only started, and no one knows what will happen in the future,” said team member Han Su-jin.

The players have been playing the sport for many years. Would it be fair for them to play with strangers from North Korea in the Olympics because they don’t have a shot at a medal this time? Is this backyard soccer?

“Will I be able to play even one game?” asked Han Do-hee, a second goalie who only played about ten times while being on the national team for 12 years. Can she, or her teammates, tolerate North Korean players?

“Are you willing to be a member of the Korean national team?” Some players who are actually Americans or Canadians responded to this almost spam-like call. Will they be convinced that they are also representing North Korea, which threatens their countries, families and friends?

“I hope I won’t be pressured to employ North Korean players,” said team coach Sarah Murray. What if she is pressured?

Why was the women’s ice hockey team chosen for a joint team? Is it because of its mediocre position? Or due to any other consideration? Many questions cropped up. Then I remembered what President Moon Jae-in said during his campaign. “Opportunities will be equal. Process will be fair. Outcome will be just,” he said. Do people come first as he promised?

I agree that the PyeongChang Olympics should be a chance to improve relations with North Korea. The government is willing to invite the 230-member cheering squad as well as a few North Korean athletes despite the tears of some Korean athletes. The determination is understandable, but should we stage the show of a joint team? Is it for the best?

I was there when PyeongChang was chosen as the host of the 2018 Winter Olympics in Durban, South Africa in 2011. I was asked, “PyeongChang? Not Pyongyang?” PyeongChang was an unfamiliar name then. I used to dismiss the confusion with Pyongyang, but I am not sure anymore.

With 21 days left for the Games, we should be praising the “blood, sweat and tears” of our athletes. But we are only talking about Pyongyang now.