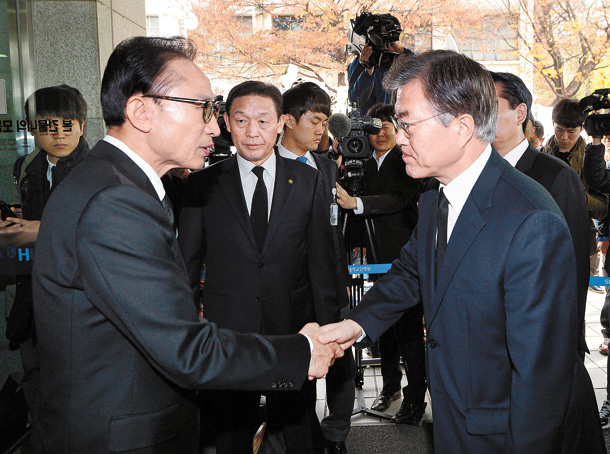 Former President Lee Myung-bak, left, shakes hands with Moon Jae-in, then-chairman of the New Politics Alliance for Democracy, the predecessor of the current ruling Democratic Party, when they paid tribute at a mourning altar for the late President Kim Young-sam on Nov. 22, 2015. Moon said on Thursday that he was furious that Lee accused him of pursuing a vendetta over the death of his longtime friend and mentor, late President Roh Moo-hyun. [YONHAP]

President Moon Jae-in said he was furious that former President Lee Myung-bak accused him of pursuing a vendetta over the death of his longtime friend and mentor, Roh Moo-hyun.

The Blue House issued a brief but strongly worded statement Thursday morning to respond to Lee’s accusation the previous day that the Moon administration is pushing investigations into his associates on trumped-up charges of corruption as political payback for the 2009 suicide of former president Roh.

After surrendering office to Lee in 2008, Roh’s family and associates were investigated by the Lee administration for corruption.

Moon was also infuriated that Lee suggested that the Blue House was manipulating the prosecution for political retaliation, according to Park. “It is an insult to our administration, a denial of the judicial order that a former president must never say and an act that crossed the political red line,” Moon was quoted as saying by Park.

The emotional reaction of Moon came a day after Lee held a press conference about investigations of his associates over allegations that they had misappropriated funds of the National Intelligence Service (NIS).

Lee said the Moon administration was “shaking the foundation of the country by overturning history and employing vindictive politics.” He also attacked Moon for using the prosecution to conduct a “political campaign to annihilate the conservatives” and exact “revenge for Roh’s death.”

Roh killed himself in 2009 during a government probe over his family receiving bribes from a businessman. Allies of the former president have argued that the Lee administration “politically murdered” Roh by humiliating him with corruption allegations involving his wife and elder brother.

Roh was Moon’s longtime friend and political mentor and Moon inherited both his ideological views and political assets, including enthusiastic young, liberal supporters.

The Blue House was tightlipped on Wednesday after Lee’s press conference, but it decided to aggressively respond after Moon had a meeting with key aides Thursday morning. It was the first time that Moon criticized Lee publicly since he took office last May.

The source also said Moon’s rage goes beyond personal feelings because Lee suggested the Blue House was directing prosecutors to go after him and his associates in a political vendetta.

“If Lee felt it was an unreasonable investigation, he could have just pointed out the facts,” another presidential aide told the JoongAng Ilbo. “Why does he mention Roh? Does he even know what Roh’s death means to us?”

Another participant in the meeting said Moon was infuriated at Lee’s suggestion of Blue House pressure on the prosecution. “Moon felt insulted because Lee talked about revenge when he was trying hard to protect the neutrality of the prosecution,” he said.

Blue House officials also rejected speculation that Moon’s reaction was a message to prosecutors to intensify their efforts to go after Lee.

“That might have been the case in the Lee presidency, but Moon made clear we don’t do things in that way,” a presidential aide said.

Earlier in the morning, close associates of Lee started an aggressive campaign to defend the former leader, threatening to use compromising information they have on the Roh administration.

In an interview with KBS Radio, Kim Hyo-jae, former presidential senior secretary for political affairs, said it is open knowledge that Moon associates have long desired to hold Lee accountable for Roh’s death, and Lee will respond aggressively to all attacks.

“Lee was the president for five years, and that allowed looking into all the information from all law enforcement and intelligence authorities throughout his tenure,” Kim said. “How can we not have information?”

He, however, said Lee associates do not want to use the information for political purposes. “If we make it all public, what will happen to the country? I don’t think that is desirable,” Kim said.

Other Lee confidantes also defended the former president in media interviews. “This year is the year of the dog,” said Kim Du-woo, former senior presidential secretary for public affairs, in an interview with CBS Radio. “Do they really want a dogfight with us?”

“Are Roh and members of the Roh Blue House truly noble and transparent? The prosecution once investigated many suspicions, but let them go because Roh killed himself,” Kim said.

The prosecution is pushing forward four investigations simultaneously against Lee associates. The prosecution is investigating suspicions surrounding Lee and an auto component maker, DAS. Lee was suspected to be the actual owner of DAS, although its formal owner is listed as his elder brother.

Lee was accused of using his power as president to collect DAS’s investment from a failed offshore fund, BBK, before small private investors retrieved their money through a civil suit.

The prosecution is also investigating another allegation that massive slush funds were created by embezzling money from DAS.

Another investigation is also ongoing over suspicions that Lee was at the top of the chain of command in the military’s systemic intervention in domestic politics. Former Defense Minister Kim Kwan-jin was already questioned about the allegation that Lee had ordered or given tacit approval to the cyber command’s illegal operations to influence general and presidential elections.

The latest probe was on the suspicion that the Lee Blue House misappropriated NIS funds. Former presidential secretaries and NIS officials are being investigated over the scandal. Kim Baek-jun, Lee’s longtime aide who served as the presidential secretary for general affairs, and Kim Jin-mo, former civil affairs secretary, were detained early Wednesday, prompting Lee to hold the press conference later in the evening.

According to Chung Doo-un, an estranged political ally of Lee, the former president probably felt a sense of crisis because one of his confidants became a cooperating witness for the prosecution.

Chung told the JoongAng Ilbo on Thursday that Kim Hee-jung, who served as first presidential secretary in the Lee Blue House, recently texted him in an intriguing way. “Before telling everything to the prosecution, Kim sent me a text message saying he does not want to be an embarrassing father anymore,” Chung said.

Rep. Park Hong-geun of the ruling Democratic Party said Thursday that Kim had told the prosecution that 100 million won ($93,414) of NIS funds was sent to the first lady’s office and the money was used to buy luxury fashion items.

Until he resigned from the Blue House post in 2012 over a corruption scandal, Kim served Lee as his private secretary for 15 years. He was later convicted of receiving money from a savings bank and served a prison term. Lee did not issue a presidential pardon for him.

In another interview with TBS Radio, Chung said Kim probably betrayed Lee out of bitterness. “Kim’s wife killed herself while he was in prison,” Chung said. “But Lee didn’t even attend the funeral. He didn’t even send flowers.”

Chung told the JoongAng Ilbo that it is a matter of time before all suspicions surrounding Lee will be exposed, because Kim was the key to all money matters of the former president.

Chung also said Lee probably did not expect the prosecution to investigate the NIS scandal, because it has been a long practice of the Blue House, including Lee’s liberal predecessors, to misappropriate the spy agency’s secret operations funds. “Lee, therefore, failed to persuade Kim in advance,” Chung said.