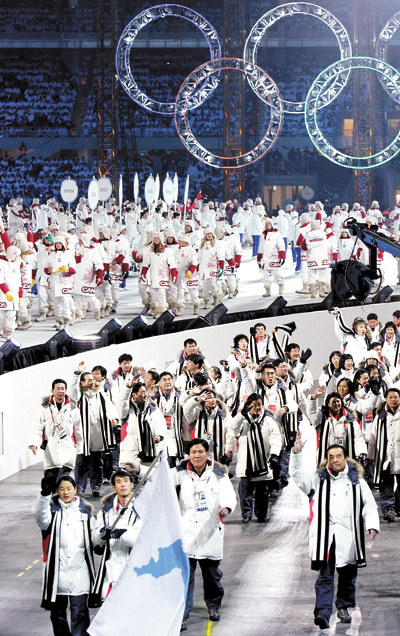 North and South Korea march together during the opening ceremony of the 2006 Winter Olympics in Turin, Italy. The countries agreed Wednesday to replicate the scene on Feb. 9 for the PyeongChang Games. [YONHAP]

North and South Korea agreed to form a joint women’s ice hockey team for the PyeongChang Winter Olympics next month and march side-by-side during the opening ceremony on Feb. 9 behind a white flag with a blue Korean Peninsula in the middle, a big step toward reconciliation after a year of rising tensions over missile and nuclear tests.

The International Olympic Committee (IOC) and the national Olympic committees of both countries will finalize the agreement when they convene Saturday at IOC headquarters in Lausanne, Switzerland.

The two countries have combined teams only twice in international sport competitions before - for the World Table Tennis Championship in February 1991 and the FIFA World Youth Championship in July 1991 - but never did so for the Olympics.

The decisions were among 11 agreements hammered out in the latest round of inter-Korean talks. The working-level meeting, held Wednesday near the border on the southern side, began at 10 a.m. and ran late into the night, touching on a myriad of issues from the Olympics to cultural exchanges, reflecting the gap in official talks between the two countries of more than two years.

When the Unification Ministry disclosed the 11 major points in a press release, several immediately drew squawks from local critics, who contended that South Korea was being too accommodating to a pariah state eager to drive a wedge between Seoul and its ally Washington, while attempting to buy time for its missile and nuclear development programs.

One had to do with North Korea’s Masikryong Ski Resort, a pet project of leader Kim Jong-un, which opened in 2014 on the hopes it would attract foreign tourists and earn foreign currency for the cash-strapped regime. The luxury project failed and is virtually deserted today, North Korea experts say.

On Seoul’s request, the two countries agreed that South Korean ski athletes will travel to the Masikryong Ski Resort in the coming days to “train together” with their North Korean counterparts. But the athletes, said Vice Unification Minister Chun Hae-sung, won’t be those competing in the upcoming Olympics, nor will they be members of South Korea’s official national ski team.

The South will be sending “competent athletes from the Korea Ski Association,” as Chun vaguely put it, leaving conservatives here wondering whether Seoul was actually being exploited to promote Kim’s personality cult.

“The common view on the Masikryong Ski Resort,” said a local diplomatic source, “is that it symbolizes North Korea’s cruelty - building an extravagant ski resort and showing it off as some kind of a legacy of Kim, when people there are starving.”

The use of the flag showing the Korean Peninsula for the opening ceremony will mean the South, host of the Games, won’t be marching behind its national flag, the Taegeukgi, another sore point for local conservatives.

Sarah Murray, head coach for South Korea’s women’s ice hockey team, warned that her players would suffer “damage” if North Korean athletes were added onto the roster because the South Koreans “earned their spots” and thought they deserved to go to the Games.

Chun, briefing local reporters about the latest meeting in a press conference Wednesday night, said a team of North Korean athletes will be arriving on Feb. 1, after which they will begin training with the South Korean players as early as possible. South Korea’s head coach will have the final say on who gets picked.

Unification Minister Cho Myoung-gyon said Thursday that five to six North Korean players, out of at least 10 who will arrive in the South, will gain extra spots in the Olympic team, originally set at 23.

Both countries also agreed to hold a joint cultural event at Mount Kumgang, a tourism destination in North Korea, and have a team of inspectors arrive next Tuesday, staying until Thursday, to check the facilities.

Kumgang, just north of the inter-Korean border on the east coast and the second tallest mountain in North Korea, was once a linchpin of South-North cooperation when it opened a tour zone in 1998, attracting some 2 million South Koreans until 2008, before Seoul banned all tours following the fatal shooting of a 53-year-old South Korean tourist by a North Korean guard. The road connecting the South with the scenic mountain, which was shut after the travel ban went into effect, will reopen after nearly a decade for the South Korean inspectors to use.

Chun said the day-long cultural event will likely be held late this month or in early February, possibly including a musical performance or poem recital. It will be participated in by figures from the local culture, sports and religion sectors and civic groups.

The main opposition Liberty Korean Party slammed the Moon Jae-in administration for orchestrating a “Pyongyang Olympics,” saying the progressive president was “bribing” the North to join the Winter Games and trashing South Koreans’ pride in the process.

Chun said the inter-Korean cooperation initiatives would be held for the sake of the Olympics, saying Seoul had no intentions of pursuing any joint economic project with the North, which would be in violation of United Nations Security Council resolutions, or have South Korean nationals regularly visit the regime.

White House Press Secretary Sarah Sanders said Wednesday in a media briefing that the U.S. saw the Koreas’ joint entrance as an “opportunity for the regime to see the value of ending its international isolation by denuclearization.”

She continued, “We hope that this experience gives North Korea and its athletes a small taste of freedom, and that rubs off and it’s something that spreads and impacts in these negotiations and in these conversations.”

Among other agreements reached, North Korea will send some 230 members of a cheerleading squad and 30 members of a taekwondo demonstration team to the Olympics, which last from Feb. 9 to 25, as part of a larger delegation that will include high-level government officials, athletes, reporters and orchestra members.

The taekwondo demonstrators will perform both in Seoul and Gangneung, one of three venues in Gangwon where the Olympics will be held.

The athletes will arrive on Feb. 1, while the rest will arrive six days later. The delegation of athletes, cheerleaders, taekwondo demonstrators, reporters and officials of its national Olympic committee will travel to the South through a road that crosses the border near the west coast.

North Korea had asked the South last Monday to allow its orchestra members pass through the Panmunjom truce village, to which Seoul did not immediately reply.

Another delegation of some 150 people will attend the Paralympics, which last from March 9 to 18.