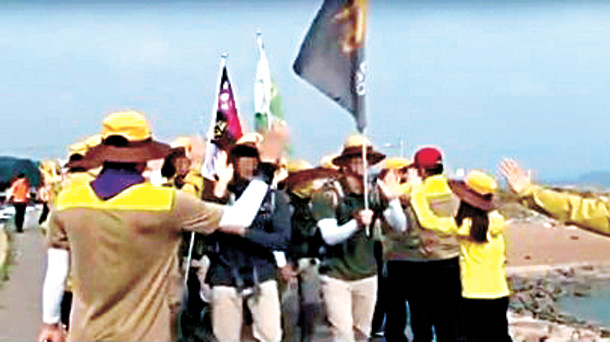 After an extremely competitive recruitment process, one employee at Korea Electric Power Corporation (Kepco) says he was hired and then placed in the company’s Marine Corps boot camp, an experience so brutal that he says he prefers not to think about it.

“At the start of our training,” he said, asking to remain anonymous, “we received military punishment, which made me wonder whether I had gotten a job or joined the military. We were forced to hold inflatable boats over our heads. It was more painful than my military service training.”

“When I got hired,” said one Posco employee, who also asked not to be named, “all hires were sent to a night-long Marine Corps boot camp. Some of the female employees were so out of breath that they collapsed. After that, the difficulty of the training decreased.”

Many companies use military-style training hoping to impart their new recruits with tenacity and determination, but employees who may otherwise oppose such practices often feel unable to freely express their views without risking their jobs.

Last year, Hyundai Motor Group, Korea Investments & Securities Company and other conglomerates scheduled climbs at Mount Jiri and Mount Halla as part of their employees training programs. The start of one program was at 4:00 a.m. and included 12 hours of hiking, followed by another 12 hours the following day. “It was hard-core, not an easy hike,” said one trainee who participated. “On some paths, an ambulance following us and one trainee needed emergency treatment after injuring their leg. I don’t think such training is modern or very creative.”

“We have the climbing program to teach new employees from various backgrounds how to overcome hardship and cooperate,” said the marketing director of Hyundai Motor Group, “but it’s not that challenging. Employees with medical issues don’t need to participate, but because they’re newcomers, almost everyone does.”

“The company says such training is optional,” said one recruit who took part, “but as a new employee, it’s not so easy to decline.”

Unsurprisingly, such methods are not very popular with employees themselves. According to a survey of 296 people by Job Korea, a job searching website, 74 percent of respondents said training new recruits is “necessary,” with 66.7 percent adding that the purpose of such training ought to be to learn basic information about the job.

Yet many companies continue to feel that these practices are the most effective. “This happens because companies have a militarized view and ignore the value of creativity and independence,” said Lee Byoung-hoon, professor of sociology at Chung-Ang University. “But in the fourth industrial revolution, this militarized view is outmoded.”

Not all companies, however, are refusing to change. Kepco discontinued its boot camp after the last one in 2017. “I heard the training was meant to strengthen mental grit and develop teamwork skills,” said Kepco’s marketing director. “The trainees actually wore uniforms, and there wasn’t much physical difficulty so not many newcomers had negative experiences. But there were complaints that it was too old-fashioned, so we decided not to include it in the upcoming 2018 training.”

“These kinds of military training disappeared in Japan long ago and would never even be considered in Western culture,” said Kwon Soon-won, professor of business at Sookmyung Women’s University. “It is true that the militarized company culture was beneficial during industrialization. At that time, a military culture and absolute loyalty to the company was the trend, but now it’s totally different. Now, companies should focus on developing creativity rather sticking to tradition.”