Nothing to see here, folks

Nothing to see here, folks 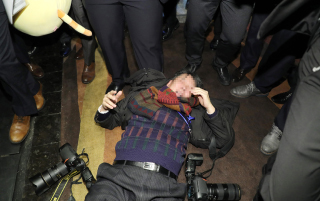 A photojournalist from the Hankook Ilbo on Dec. 14, 2017, after more than 15 Chinese security guards punched and kicked him at a Korea-China trade event in Beijing attended by President Moon Jae-in. [JOINT PRESS CORPS]

In a world where major news breaks every day, what happened a month ago often seems like ancient history and is quickly forgotten. The Chinese bodyguards’ beating of the Korean presidential press on Dec. 14, 2017, has become one such forgotten incident. President Moon Jae-in’s press conference on Jan. 10 reminded me of this seemingly old story.

“The president’s loyal followers have issued outrageous comments when reporters write articles critical of the government,” one reporter said. “There probably is no politician who received more malicious comments and text messages,” Moon said. “Reporters should remain calm. There is no need to react too sensitively.”

It was a rare event in the international community for local security guards to beat up reporters who were simply following a visiting foreign leader, but it was even more rare for the victims, not the offenders, to face fierce criticism from members of their own country.

One of the victims, a 45-year-old photojournalist from the Maeil Business Newspaper, suffered serious injuries to his nose and eye. After surgeries, the man, surnamed Lee, was discharged from the hospital 20 days later, but he could not go back to work. He is reportedly staying at a Buddhist temple in Milyang, South Gyeongsang, away from his family. He is suffering from serious trauma, insomnia and dizziness. He doesn’t contact the outside world. He only meets his family during therapy hours. He has lost 90 percent of his sense of taste and smell. He was an enthusiastic cook who once published a cookbook and posted child-friendly recipes on his blog. His coworkers have said they are worried about him.

Another victim is a 52-year-old photojournalist for the Hankook Ilbo surnamed Koh, who suffered a fracture thoracic vertebrae. After treatments, he returned to work at the Blue House on Jan. 2.

“Injuries are a frequent part of the photojournalists’ job, but it was unimaginable that such an incident took place at an event during a presidential visit to another country,” he said. “I thought things were strange because the Chinese public security forces were much rougher compared to the previous day.”

He, however, said the criticism he faced was even more unbearable than the physical violence.

After the media reported the story, some members of the public reacted with comments such as “Journalist garbage deserve a beating,” “I feel satisfied” and “The government must seek compensation from the journalists.” The comments flooded portal sites, social network services and the petition board of the Blue House.

The identities of the two journalists were laid bare and their companies were flooded with phone calls. “Not only Lee, but also his wife and his children, who are just elementary school students, were extremely shocked,” said one of Lee’s coworkers.

“I was terrified and devastated by the people’s ferocity,” Koh said.

The attacks were from some of Moon’s followers, who were upset by media reports that Moon was treated poorly in China. South Chungcheong Gov. An Hee-jung and a professor, Suh Min, criticized the unreasonableness of Moon’s supporters and also faced attacks as a result.

Their emails and text messages threaten to “smash your head” and “Be watchful of your children.” Moon, however, told the reporters that he also had some experiences, so they should remain calm. But his supporters may take this as a message that they can continue to act this way without reprieve.

After the brutal beatings, the Blue House did not lodge a strong complaint to China, because the offenders were bodyguards hired by the Korea Trade-Investment Promotion Agency. No matter who hired the bodyguards, however, violence against Korean people, especially members of the presidential press, warrants a strong protest.

China later detained one bodyguard, claiming that it was an accident, not a group beating. On Jan. 5, China’s Assistant Minister of Foreign Affairs Kong Xuanyou met with Vice Foreign Minister Lim Sung-nam and offered a belated, lukewarm apology about “an unfortunate incident that took place during Moon’s state visit.” But China refused to accept Korea’s demand for a thorough investigation and stern punishment of all the people who participated in the beating.

On Jan. 14, North Korea’s state media disrespected Moon as “one of the South Korean officials” and ridiculed his New Year’s address as “silly nonsense.” They said it was hard to stand Moon’s “humiliating flattery [to U.S. President Donald Trump].”

The next day, a spokesman of the Unification Ministry said during a briefing about inter-Korean talks at the Panmunjeom, “We think the North has its own reasons.”