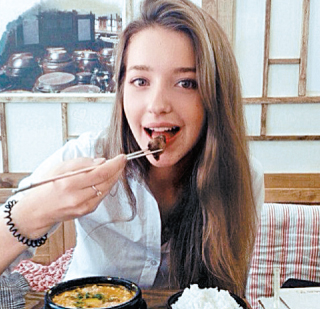 Angelina Danilova, a 21-year-old Russian Instagram star, eats soft tofu soup at a Korean restaurant in 2014 in St. Petersburg. This photo, uploaded to her Instagram page, helped her become famous in Korea when it was re-posted on a Korean online community under the caption “Russian model who wants to marry a Korean man.” [ANGELINA DANILOVA INSTAGRAM]

Her journey promoting Korea abroad, which led her to receive an award along with the chairman of CJ group last Tuesday, began with a single picture of herself having soft tofu soup in St. Petersburg.

Just two years ago, Danilova was a typical university student in Russia, studying interior design at Saint Petersburg University of Technology and Design. She became interested in Korean culture during that time, frequently eating at Korean restaurants in her city and watching videos of K-pop groups like EXO and Big Bang.

In 2015, one Korean internet user turned Danilova into an overnight sensation here. Finding Danilova’s 2014 Instagram post, in which she is seen having soft tofu soup in St. Petersburg, the user reposted the picture to an online community with the caption “Russian model who wants to marry a Korean man.” The post spread like wildfire across various media platforms, and thousands in Korea turned to Instagram to search for the “Russian Elf,” one of the many flattering nicknames given to Danilova.

“In the first 3 years of using Instagram I only had 2,000 followers, but I found that it had exploded to 10,000 when I checked one day,” Danilova told the JoongAng Ilbo in Korean. “A few days after, the number reached 20,000. I had never imagined that I would become famous in Korea.”

Korea’s media industry was quick to capitalize on Danilova’s growing popularity in the country. In 2016, the TV channel tvN cast her for the reality show “Babel 250,” in which Danilova lived with six others cast members from across the globe and tried to establish friendships while breaking cultural and linguistic barriers. Her appearance on the show attracted even more followers to her Instagram page.

An aspiring actress and singer, Danilova auditioned for many roles in Korean media. Her unfamiliarity with the Korean language, however, precluded her from getting many of the parts she wanted when she first arrived. Fluent in Russian, English, Italian and Serbian, she had difficulties learning Korean, which was phonetically quite different from the languages she already had under her belt.

“My Korean improved considerably since I came to Korea for the first time two years ago,” Danilova said. “People tell me now I speak at the level of a sixth-grader.”

Last year, Danilova enjoyed considerable success as a celebrity endorser for major Korean businesses. She became the face of the Tale of Five Kingdoms, a mobile game developed by 4:33 Creative Lab, as well as the main model of the cosmetics brand Banila Co., alongside Taeyeon from Girls’ Generation. The influence Danilova wields in promoting Korean culture on social media didn’t go unnoticed. The hundreds of pictures she posts about life, culture and food in Korea all reach her 600,000 followers, many of whom aren’t Korean.

The Corea Image Communication Institute, a nonprofit organization that promotes Korean culture abroad, chose her to be the 2018 recipient of the Korea Flower Stone Award for her work promoting Korea to the world. Danilova received her award at the Grand InterContinental Seoul COEX last Tuesday. Fellow recipients that day included Sohn Kyung-shik, chairman of CJ Group, the food and media conglomerate, and Joachim Son-Forget, the first Korean-born member of the French National Assembly.

“Korea is a magical, progressive and smart country that surprises me more and more everyday,” Danilova said. “I want to have long-lasting ties with this country and connect with people 24 hours a day.”