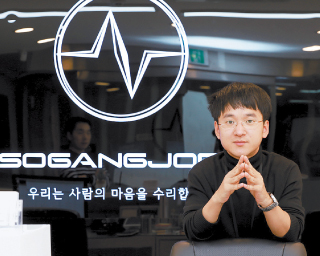 After Kim Hak-min fled North Korea in 2011 by crossing the frozen Yalu River to become an iPhone repair technician in Seoul, his story has been widely reported by local and foreign media, including in a lengthy interview by the Korea JoongAng Daily in July. As a result, he has seen his number of customers increase four times over.

“Following the wide media coverage,” said Kim, who is nicknamed “Sogang Jobs,” after Steve Jobs, “a large number of people kept coming to get their iPhones fixed. And they had to stand in the hallway and even wait outside because my office was too small.”

He was then invited to give a speech at the top U.S. liberal arts school Pomona College and to the Apple headquarters in Cupertino, California. And on Saturday, he relocated to a much larger office, about 100 square meters (1,076 square feet), in a building owned by Sogang University.

“There have been many changes to my life over the past year other than moving my office here,” said Kim. Recalling the speech he gave to students and professors at Pomona College about his life in the two Koreas, Kim said many people were moved to tears.

“They were very attentive to my story. They burst into laughter when I said even though I was brainwashed to believe that the United States was the worst county on the planet, I always fanaticized about their country and always wanted to come here.”

With his new office now near Sogang University in Mapo District, where he is a student in electric engineering, Sogang Jobs aspires to grow his business beyond just iPhone and iPad repairs to one where people can come freely and feel at home.

Kim, who is now 30, was born in the North Korean province of North Hamgyong, which borders China. His father worked in the coal mines as an engineer. At the age of 7, Kim became obsessed with electric gadgets.

“I just wanted to disassemble everything,” he said in the July interview with the KJD. Later on, he developed a reputation as the go-to boy for fixing broken wristwatches, televisions and other gadgets. After fleeing his poverty-stricken homeland in 2011 and settling in the South, Kim at first struggled to adapt to his new life and fell into depression, leading him and his girlfriend, who had fled with him, to part ways.

But upon reading “Steve Jobs” by Walter Isaacson, which was published shortly after Jobs’ death in 2011, Kim became fascinated with iPhones as well as other Apple products.

Using his technical skills, he opened a repair ship called Sogang Jobs. His improbable story attracted media attention, and after the Korea JoongAng Daily’s interview, he was also covered by BBC and NPR, as well as a number of local media outlets.

“In the past, I had this big dream to change the world in a positive way, as Steve Jobs did,” Kim said. “But now, I feel the value of finding happiness through my daily work here. And I hope to continue finding and feeling that sense of happiness.”