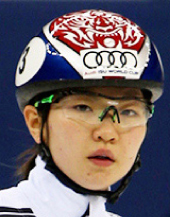 The women’s short-track speed skating team cut a coach Thursday after he hit Shim Suk-hee, the team leader and Olympic gold medalist, on Tuesday, 20 days before the start of the 2018 PyeongChang Winter Olympics.

According to sources from the skating industry, Coach Cho Jae-beom struck Shim on Tuesday evening during a one-on-one meeting in Jincheon National Training Center in North Chungcheong. After the incident, Shim left the center and headed to a hospital to be treated for minor injuries. She returned Thursday morning, but had to miss President Moon Jae-in’s visit to the center on Wednesday.

“There was a problem between the coach and the athlete during training on Jan. 16,” the Korea Skating Union said. “We opened an emergency meeting on the morning of Jan. 18 and suspended the said coach from his duties.”

The union also announced that Park Se-woo, who has trained the eight-time Olympic medalist and speed skater Viktor An, will be joining the team as the new coach.

Shim, who won three medals in the 2014 Sochi Winter Games including gold in the 3,000 meter race, is regarded as one of Korea’s best female speed skaters. Due to participate in both individual and team races, Shim is expected to help Korea medal in speed skating races in this year’s Olympics, set to take place from Feb. 9-25.

Though the exact reason for the assault is still unknown, insiders suspect that Shim clashed with Cho when he was disappointed with the pace of her progress in light of the impending Games. The incident comes as a huge shock because Shim has often displayed her fondness for Cho, her trainer of 14 years.

Shim met Cho for the first time when she was in the fifth grade. Cho, seeing her potential, advised Shim to leave her hometown of Gangneung, Gangwon, to move to Seoul to train. Shim credited Cho for helping her win gold in the 3,000 meter race, silver in the 1,500 meter race and bronze in the 1,000 meter race at Sochi.

“When I am weak, he makes me strong, and when I am tired, he is my energy,” Shim told reporters in a 2015 interview. “The coach helped me focus only on sports and not stray away.”

Though Shim is known for being a model athlete who never complains and trains diligently, her relationship with her coach is thought to have turned sour when she expressed her grievances at him, who had lately been demanding a lot.

Tension was high as the Olympics were just around the corner and the rise of a younger rival, fellow teammate Choi Min-jeong, pressured her to practice even harder.

Last year, Shim uploaded a quote on her social media account that read “I thought my existence was only valuable if I was recognized by others.”

“Right now, just before the Olympics, athletes are going through their most difficult time,” said Hwang Seung-hyun, a researcher from the Korea Institute of Sport Science. “Short-track speed skaters may be especially anxious because there is huge pressure for them to medal.”

“Shim and the rest of the athletes should try not to think too much about the incident,” he added. “I hope coaches, parents and others frequently assure them that everything’s all right.”