IOC permits North Korea to ski and skate at Olympics

IOC permits North Korea to ski and skate at Olympics 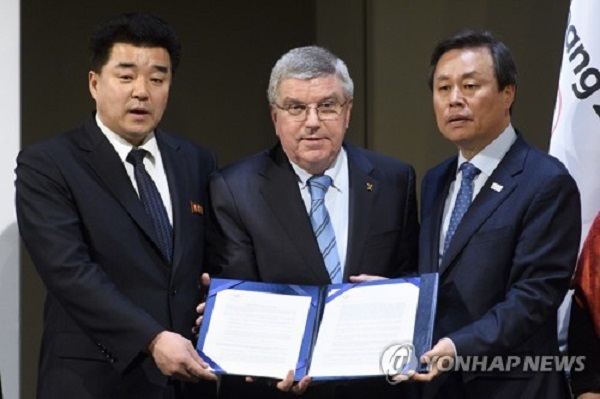 The International Olympic Committee (IOC) announced Saturday that 22 North Korean athletes will be competing in three sports and five disciplines in the upcoming PyeongChang Winter Games.

The decision came after South and North Korean officials gathered at the IOC headquarters in Lausanne, Switzerland, to hammer out the details of North Korea’s participation in the Olympics, which will kick off on Feb. 9 in South Korea’s northeastern Gangwon province, with IOC President Thomas Bach.

During the opening ceremony on Feb. 9, North and South Korea will march under the “Korean Unification Flag,” also known as the Korean Peninsula flag, which is a white flag with a blue silhouette of the peninsula in the middle. Athletes from both countries will wear a special uniform featuring the Korean Unification flag. The acronym for the team will be “COR.”

A unified women’s ice hockey team will be formed, with 12 North Korean players and one official from North Korea’s national Olympic committee added onto the South’s existing Olympic squad of 23 players. With respect to fair play and the other competing teams, only 22 players will be entitled to play in each game.

The team will be led by South Korea’s head coach, who will select at least three players from the North for each match. The team will compete as “Korea,” with the anthem being the Korean folk song “Arirang.”

In all other sports, the North Korean athletes will compete for the North in their respective uniforms, according to the declaration.

Figure skating pair Ryom Tae-ok and Kim Ju-sik, who qualified for the Winter Games but missed the deadline of applications last October, will be permitted to play.

Jong Kwang-bom and Choe Un-song, both men, will compete in short track speed skating, in the 1,500 meters and 500 meters, respectively.

In alpine skiing, two men – Choe Myong-gwang and Kang Song-il—and one woman, Kim Ryon-hyang, will compete in both the Giant Slalom and Slalom events.

Meanwhile, North Korea will send a seven-member delegation of inspectors led by Hyon Song-wol, leader of the Samjiyon Orchestra, tomorrow across the border to check local facilities for two orchestra concerts next month.

In a statement faxed to Seoul on Saturday at 6:40 p.m. through a recently restored hotline in the truce village of Panmunjom, Pyongyang said it would resume its plans to dispatch the inspectors, a day after it cancelled them, according to South Korea’s Unification Ministry, which handles inter-Korean affairs.

The North did not explain why it rescinded its earlier decision not to dispatch the group, or why it decided to send them back. The North Korean inspectors were initially scheduled to arrive in the South Saturday morning, staying until Sunday.

The delegation will cross over the border by taking a road linking the two countries near the west coast Sunday morning and look around Gangneung, Gangwon. On Monday, they will travel to Seoul, look around the capital and then return back to North Korea.

Both Koreas had agreed last Monday in working-level talks that the North will be sending 140 members of the Samjiyon Orchestra to South Korea next month to perform once in Seoul and once in Gangneung.

Pyongyang still hasn’t responded to Seoul’s offer to send a South Korean delegation to the North next Tuesday, staying until Thursday to check facilities at the Mount Kumgang resort and Masikryong Ski Resort.

The two Koreas agreed last Wednesday in the latest inter-Korean meeting to hold a joint cultural event at Mount Kumgang and have South Korean ski athletes train with their North Korean counterparts at the ski resort, known to be a symbolic pet project of North Korean leader Kim Jong-un.