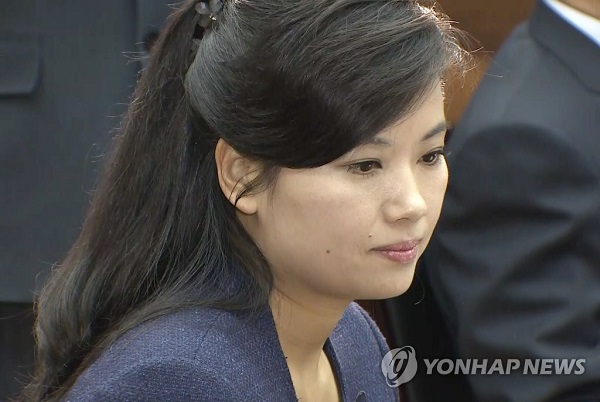 Hyon Song-wol, leader of North Korea's Samjiyon Orchestra, who was planned to lead a seven-member delegation of inspectors this weekend to check local facilities ahead of the orchestra's concerts next month in Seoul and Gangneung, Gangwon. [YONHAP]

North Korea rescinded its decision to send a team of inspectors to South Korea over the weekend to check local facilities for two orchestra concerts next month.

In a statement faxed to Seoul on Friday at 10 p.m. through a recently restored hotline in the truce village of Panmunjom, Pyongyang said it would “halt” its plans to dispatch the inspectors, without explaining why, according to South Korea’s Unification Ministry, which handles inter-Korean affairs.

The North had told the South Friday morning that it would send seven inspectors, including Hyon Song-wol, leader of the Samjiyon Orchestra, for the checkup. After consultations with Seoul throughout the afternoon, both sides had agreed the North Koreans would cross over the border by taking a road linking the two countries near the west coast Saturday morning.

A senior official at the Unification Ministry said the team was planning to look around Gangneung, Gangwon, on Saturday, and then travel to Seoul on Sunday, staying in South Korea for a total of two days.

Both Koreas had agreed last Monday in working-level talks that the North will be sending 140 members of the Samjiyon Orchestra to South Korea next month to perform once in each Seoul and Gangneung.

Seoul separately asked Pyongyang for permission on Friday that its own team of 12 inspectors visit North Korea next Tuesday by taking a road along the east coast connecting the two countries, staying until Thursday to check facilities at the Mount Kumgang resort and Masikryong Ski Resort.

Pyongyang has yet to respond to this offer, according to the Unification Ministry.

The two Koreas agreed Wednesday in the latest inter-Korean dialogue to hold a joint cultural event at Mount Kumgang and have South Korean ski athletes train with their North Korean counterparts at the ski resort, known to be a symbolic pet project of North Korean leader Kim Jong-un.