Choi Da-bin to finally get her moment at PyeongChang

Choi Da-bin to finally get her moment at PyeongChang

Korea’s figure skater Choi Da-bin had been out of the media spotlight for years. 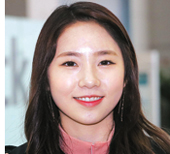 Early on, she was overshadowed by big-name predecessor Kim Yu-na, who overwhelmed the figure skating world by winning titles in nearly all international competitions in her heyday, including the 2009 International Skating Union (ISU) World Figure Skating Championships and the 2010 Vancouver Winter Olympic Games.

Since Kim’s retirement in 2014, junior skaters like You Young, Lim Eun-soo and Kim Ye-lim have emerged and caught the public eye, leaving Choi still sidelined.

From 2016, however, Choi experienced a turning point in her figure skating life.

In a national competition, the 17-year-old finished fifth but grabbed a berth in the 2017 Winter Asian Games, as top rankers gave up the rights due to age limits and injuries.

With the lucky ticket, Choi made a successful debut at the Asian Games held in Sapporo, Japan, and reached the top of the podium with a personal best of 187.54 points. She was the first Korean athlete to earn a gold medal in figure skating at the Asian Games.

Later at the ISU World Championships, she recorded 191.11 points, the highest number of points earned by a Korean figure skater since Kim Yu-na, and placed 10th to bring her country two spots at the 2018 PyeongChang Olympics.

After the accomplishments in the 2016-2017 season, she came into the limelight ahead of the first Winter Olympic Games on Korean soil.

But her pleasure was short-lived. She fell into a deep grief as her mother passed way in June last year from cancer.

Heartbroken, Choi considered skipping the national Olympic qualifying event held earlier this month, but she didn’t surrender. Choi battled on and swept the Olympic trials to claim one of the two Olympic tickets that she had won at the 2017 Worlds.

“Looking back on recent months, I’ve gone through so much,” said Choi after the national contest. “I am glad I’ve been able to overcome them. My mom is on my mind right now. If she were still here, she would have been more excited and thrilled than anyone else.”

The teenage star will skate to “Papa Can You Hear Me” by singer and pianist Nina Simone in her short program, as a dedication to her late mother. She is ready to shine on her first Olympic stage, along with heavy favorites including Russia’s Evgenia Medvedeva and Alina Zagitova, and America’s Mirai Nagasu.

The ladies’ singles figure skating event at the PyeongChang Winter Games will be held on Feb. 21 and 23 at the Gangneung Ice Arena in Gangneung, Korea.