Writers focus on humanities : Forum brings together literature professionals from around the world

Writers focus on humanities : Forum brings together literature professionals from around the world 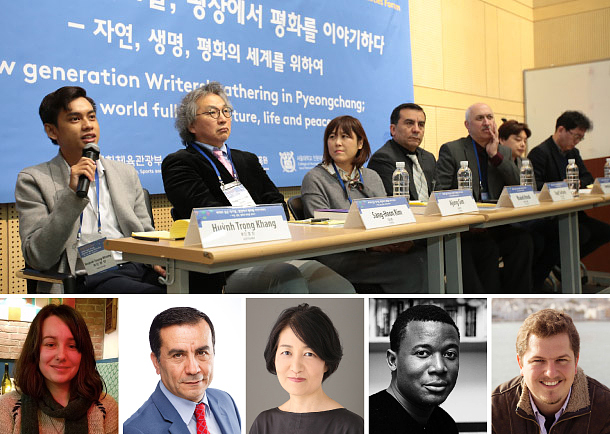 Top: Huynh Trong Khang of Vietnam speaks at the first discussion session on “Division and Conflict” on Saturday for the “2018 Pyeongchang Humanities Forum” at Seoul National University in Gwanak District, southern Seoul. From left: Deborah Smith of the United Kingdom, Khaled Hroub of Palestine, Koike Masayo of Japan, Kola Tubosun of Nigeria and Ben Clark of the United Kingdom are some of the writers participating in the forum. [2018 PYEONGCHANG HUMANITIES FORUM]

Writers from around the world have gathered in Korea to celebrate the 2018 PyeongChang Winter Olympics with pen and paper instead of skis and sleds. The Ministry of Culture, Sports, and Tourism has invited about 160 literary experts from 18 countries for the “2018 Pyeongchang Humanities Forum,” together with the Publication Industry Promotion Agency of Korea as well as the College of Humanities at Seoul National University.

Just like the Olympics aims to bring the world together through sport, writers at the event are sharing their ideas on how to tackle some of the difficulties around the world under themes such as “Division and Conflict” among countries with different cultures and ideologies, “Women and Gender” and “Poverty.” “Nature and the Environment” is another topic drawing a lot attention at the forum, alongside “Language and Cultural Diversity” and “Global and Regional Issues.”

“The pen isn’t that much stronger than sword,” said novelist Kim Yeon-su of Korea during his remarks at the opening ceremony on Friday, saying that literature is weak and has to always talk about peace. Another speaker, Hakan Gunday of Turkey, talked about how important it is for people to have sympathy when talking about each other’s painful experiences.

Khaled Hroub of Palestine talked about division and conflict, while Ben Clark of the United Kingdom focused on how to deal with poverty throughout the global community. Koike Masayo of Japan shared her ideas on how to cover issues on nature and the environment.

With greater attention being given to translating written works for the international community, the Pyeongchang Humanities Forum also invited Deborah Smith, who won the Man Booker International Prize in 2016 for her translation of the Korean novel “The Vegetarian” by Han Kang. She discussed her experience translating the creative works of others.

Away from the conferences and speeches, the writers also had time to talk with local readers yesterday. Twelve writers, including Dalmira Tiplepbergen of Kyrgyzstan, read their own work and then talked with visitors at the Starfield Library located inside COEX in southern Seoul.

The forum is not only staying in Seoul. Beginning Thursday, writers from Gyeongsang, Jeolla, and Chungcheong provinces gathered to talk about freedom, nature, and humanity, and then moved on to Pyeongchang, Gangwon to make a “peace announcement.” Each participating writer has written one sentence describing an idea to make peace on a photo, and those photos have been put together to make a bigger image. This artwork will be put up today at the Lee Hyo-seok Memorial Hall in Pyeongchang, so that visitors to the town who see the work can have time to think about their own ideas for a peaceful life.

“When we take a look at the history, small and repetitive attempts to do things have piled up and contributed to making the society better,” said Cultural Minister Do Jong-hwan. “The belief that we can change the world when we gather together starts from a tip of a pen. Just as the name Pyeonchang means ‘Spread Peace,’ I hope the ‘Peace Announcement’ resonates to the world and shines for a long time.”

To commemorate the four-day forum this month, the organizing committee for the forum will gather 24 theses from different academic fields such as humanities, social studies and natural sciences and publish a book that deals with cultural diversity in April.