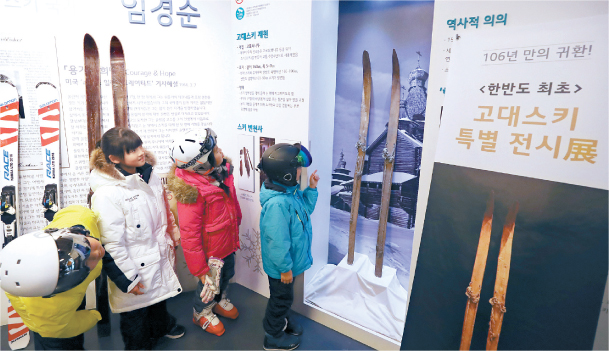 Children look at a pair of ancient skis from the northern part of the Korean Peninsula at an exhibition on the history of skiing in Korea at Konjiam Resort in Gwangju, Gyeonggi, on Sunday.

The skis, 160 centimeters (60 inches) long and 7 centimeters wide at the center, have four holes in the middle for laces to be tied with the skier’s feet, similar in form to a pair of 5,200-year-old skis found in Sweden.

The Korean skis were discovered in 1912 in North Hamgyong, a region bordering China, when the Korean Peninsula was under Japanese rule. They are owned by the Japanese Memorial Museum of Skiing, which lent the skis to the resort for an exhibition that will run until the end of the Olympics in March. [YONHAP]