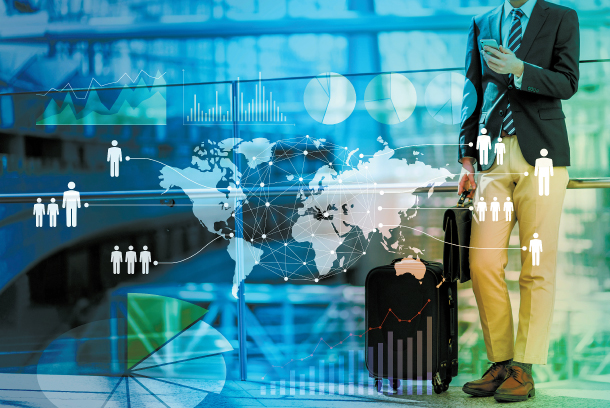 A 27-year-old flight attendant for a United Arab Emirates-based airline surnamed Kim has never regretted seeking employment overseas and is very satisfied with where she is now.

“Honestly, I had dreamed to become a flight attendant but I never even considered working overseas during the first couple of years of job seeking,” Kim said. “But as I found myself failing again and again for three years even though I submitted hundreds of resumes and upgraded my specs with various certificates, I thought why not knock on the doors of a larger foreign airline.”

According to Kim, there was nothing to lose at that point, and desperation opened up opportunities at Emirates after about three months of intensive preparation.

She now lives in Dubai, travels with crew members from all over the world and uses English as if it were her first language, since she has to use it on a daily basis. Communicating with foreign staff and living in a totally different culture was tough at first, but Kim found herself more suited to the working environment there than in Korea.

“The company gives me opportunities to speak up about things that I don’t think are just,” Kim said. “And I am learning things beyond my expectations such as language, culture and different perspectives.”

Cho Min-kyong faced similar challenges when looking for a job in the Korean market.

During the final interview for a conglomerate in Korea, the interviewer told Cho, “Your university grades don’t look very good… they are mostly Bs and Cs.”

After repeatedly being rejected by local companies, Cho struggled with depression, thinking she simply wasn’t good enough. She studied harder to obtain higher levels in TOEIC Speaking certificates or the Japanese Proficiency Test to make up for her past grades. However, the more she thought about it the stronger she felt that it was unfair for companies to judge her based on numbers and not her potential.

While searching for other opportunities, it struck her that finding jobs in Japan could be an option as she was fluent in Japanese. In April 2017, she bagged a job at Nissan Motor, a leading automaker in Japan. 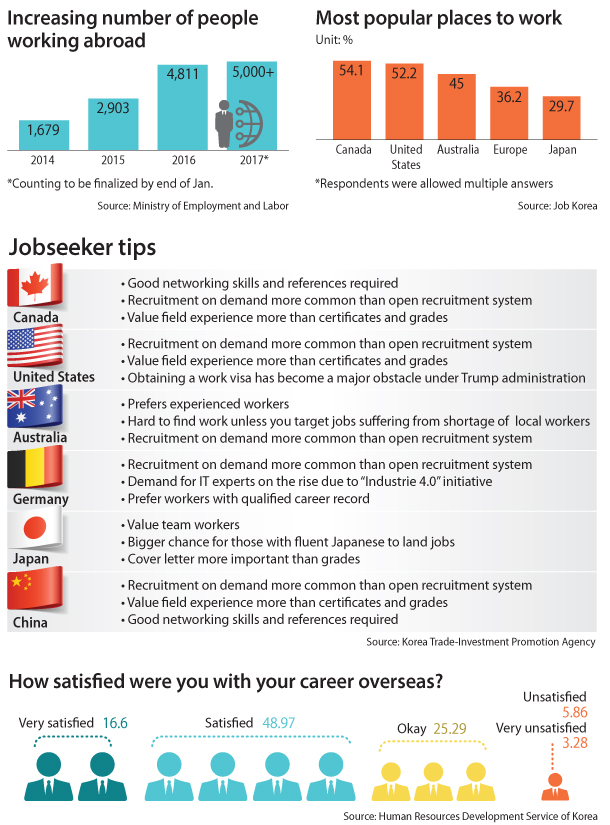 A growing number of Korean job seekers are willing to work abroad.

According to Ministry of Employment and Labor data released Wednesday, the number of Koreans that have found jobs abroad surpassed 5,000 last year, a threefold increase compared to 2014.

While exact figures for last year are due to be finalized by the end of this month, the number of Koreans landing jobs abroad has been constantly increasing since 2014, when 1,679 people found jobs overseas.

The trend is expected to continue. A survey on 458 job seekers jointly held by local employment portal Job Korea and Human Resources Development Service of Korea just two months ago shows that 90.2 percent of respondents were interested in landing jobs outside of the country.

The core reason behind such a move is the shortage of quality jobs in Korea coupled with growing opportunities, as jobs posts and tips regarding the overseas jobs market have become more accessible.

“There is a serious unemployment problem in Korea for job seekers with high academic backgrounds,” said Lee Byoung-hoon, a sociology professor at Chung-Ang University. “Opting to work abroad is one trend that stemmed from the lack of quality jobs in Korea.”

Last year’s youth unemployment rate peaked at 9.9 percent, according to Statistics Korea. It is the highest annual figure after the statistics agency began accumulating data in 2000. Youth refers to job seekers aged between 15 and 29.

Lee added that globalization and a growing preference toward a less hierarchical working environment have also pushed up job seekers’ interest in global companies headquartered abroad.

According to the Job Korea survey, 54.1 percent of respondents picked Canada as their top overseas destination to work. The United States followed with 52.2 percent, and then Australia with 45 percent. Japan was ranked fifth with 29.7 percent.

“Canada seems like a safer place to be compared to the United States,” said Kang, a 28-year-old job seeker living in Gyeonggi. “And apart from the working environment the country is known to offer a quality living environment as well as a good work-life balance.”

According to the Korea Trade-Investment Promotion Agency there’s demand among Canadian firms for foreign workers in industries like IT, tourism, early childhood education and finance, though it is generally difficult for non-English speaking job seekers to land jobs.

Obtaining a visa for Canada is relatively easier compared to the United States, however, Kotra warned that Korean job seekers must prepare to compete with locals in Canada as there’s no exclusive demand for Korean speakers, unlike some Asian countries. In the United States, Koreans have a better chance of landing a job in the medical, IT and physical education sectors, according to Kotra.

As for physical education, those with qualifications to teach Korean martial arts such as taekwondo have a higher potential of obtaining a visa.

Japan has constantly been one of the favored countries to move for work, largely due to its geographical proximity and cultural similarities.

Japan is also favored for its working environment, which is quite different to that of Korea.

A Korean employee surnamed Na, who recently got a job at Japanese convenience store chain operator Lawson, says Japanese companies tend to put more weight on applicant’s potential than their past record or major in university. Na said most of the interview questions were centered on what kind of life she lived in university rather than her grades.

Na also pointed out that Japanese companies are open-minded towards foreign talent. They are actively reaching out to recruit foreigners and there is little discrimination over employee welfare treatment between foreign and local workers, according to Na.

According to a survey held by the Labor Ministry on 5,907 Koreans that landed jobs overseas between 2013 and 2016, 65.6 percent of respondents said they were satisfied with their career overseas and only 9.3 percent showed dissatisfaction. The top reason for their satisfaction was the favorable working environment. Overseas workers were also very content that they could develop language proficiency and gain global insight while working.

Among those that have already come back to Korea as their contract period ended, 95 percent of respondents said a career overseas was a meaningful experience and 88.5 percent said they would like to work overseas again if another opportunity comes along.

“Working abroad doesn’t always give you super benefits in finding another job, but the fact that you have to survive out there alone definitely gives you an upper hand in living a better life,” said Ha Ji-yeon, a 26-year-old job seeker in Seoul who worked in Canada for about a year. “The experience was also helpful in improving my business English skills.”

Despite the good aspects of joining a foreign company, the process isn’t always rosy and not necessarily easier than entering a local company.

“I had to train really hard to bring up my English proficiency to the level where I could work at a foreign airline,” said Kim from Emirates. Watching the movie “The Devil wears Prada” over 30 times to get used to expressions was just the start. According to Kim, she participated in three group studies for those aiming to land jobs at foreign airlines every day and memorized two paragraphs of conversational expressions every day for two to three months.