‘There are no quality jobs left in Korean society’

‘There are no quality jobs left in Korean society’ 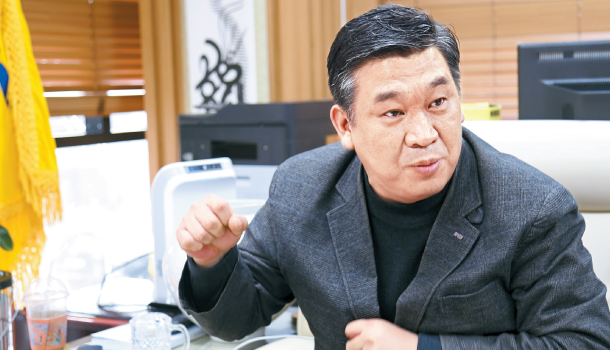 Choi Seong-jae speaks in his office in southern Seoul during an interview with the JoongAng Ilbo on Tuesday. [JOONGANG ILBO]

Choi Seong-jae, the chairman of the Korea Federation of Micro Enterprise, which represents small to medium size businesses, has been a vocal critic of the Moon Jae-in government’s drive to bring the minimum wage to 10,000 won ($9.38) an hour by 2020, citing the damage that it will cause to small business owners.

In an interview with the JoongAng Ibo on Tuesday, the 51-year-old reiterated his opposition to the government’s wage increase initiative, which has already seen the minimum wage jump to 7,530 won, a 16.4 percent increase from a year earlier - the largest margin of increase since 2000.

“While the timing of a policy is important, what is more important is listening to the needs of those affected by such a policy,” stressed the interest-group chief, who was not invited to a dinner meeting at the Blue House Tuesday for representatives from small to medium sized business organizations.

“After the government decided to increase the minimum wage, there has been overwhelming complaints filing to our office that often paralyzed our day to day functions,” Choi said. He also noted that the government is forcing many business owners to comply with the move without trying to win a “social consensus” on the issue.

Choi’s unabated criticism of the wage hike comes amidst a package of government measures intended to help businesses adjust to higher wages, including a subsidy of 130,000 won per month to every employee in businesses that employ fewer than 30 workers. The Blue House also announced a new support measure Tuesday that cuts up to 30 percent of the employment insurance paid by companies with less than 30 employees.

Q. You were not invited to the dinner meeting on Tuesday hosted by the presidential office.

A. I postponed my overseas business trips because of the meeting, thinking I would be on the guest list. The presidential office said there were too many small business organizations to invite and had no choice but to cut us out. How can it not invite the organization that has legal bargaining power [on behalf of micro enterprises]? That excuse does not make sense. I have a duty as head of the micro enterprise federation to openly object to the government’s policy when necessary.

I feel beyond outraged and saddened over being uninvited. I actually contemplated earlier today whether I should step down from my position.

What have you been criticizing the government about?

I have merely been conveying the opinions of small business owners. I have also been imploring the government to first seek a social consensus on raising the minimum wage instead of forcing us to accept it. Many micro enterprise owners are having a tough time now. The situation is particularly fragile this year because of the 16.4-percent hike in the minimum wage. We are not opposing the wage policy just for the sake of opposition. We are simply delivering what people on the ground are telling the government.

The government warned that it will disclose the names of small to medium sized businesses that fail to pay the minimum wage in the future. What do you think of that?

What complaints do small enterprise owners say of the wage hike?

A convenience store owner that I know recently laid off a part-time worker because of the wage hike. He now runs his store with his wife on a 12-hour shift. He can no longer maintain his family as he and his wife both work on different shifts. According to statistics from the National Tax Service, about 900,000 business owners closed their enterprise. Of the total, 830,000 were micro enterprise owners. There are no quality jobs left in Korean society. Those in their 40s and 50s who were laid off opted to open up their own businesses because they see no other options. Competition is so fierce as a result and many are running businesses at a loss.

I actually support the Moon government’s income-growth-led economy principle underpinning the policy. I highly approve of the government’s message that increased income will lead to improved life quality in a virtuous cycle. But people out there on the forefront of survival tell us increased costs are threatening their businesses now.

What message do you have for the government?

It has been less than a year since the Moon government took office thanks to the people’s power through the candlelight revolution. I still have high expectations for the new government. But if it prides itself on being the champion of ordinary people and small to medium sized companies, it should at least leave open a communication channel. It needs to have a humble mindset with which it is willing to heed special situations and the needs of its citizens.

This government seems to think that its policy is right in every aspect, therefore lacking humility. While the timing of a policy is important, what is more important is listening to the needs of those affected by the policy.