Cordless vacuums are put to the test

Cordless vacuums are put to the test 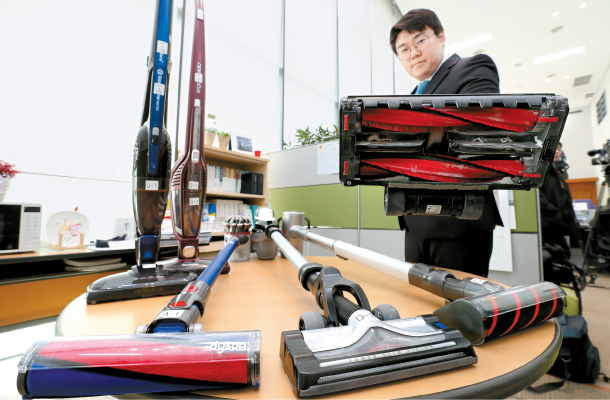 An employee from Korea Consumer Agency compares cordless vacuum cleaners at a briefing in the Government Complex in Sejong on Friday. [YONHAP]

Cordless vacuum cleaners from different brands showed a huge disparity in charging times when the Korea Consumer Agency compared the performance of nine popular models on the market.

The agency tested nine cordless vacuum cleaners from six high-profile electronics makers to compare their performance in a number of different categories - including suction power, noise level and charging time - and released the results on Sunday.

Dyson and LG products, however, beat Tefal on cleaning corners and their capability to suck up larger items like rice and cereal. Tefal gained two stars while the two rivals gained three stars.

There was a big disparity in product usage time on a full battery charge. Among the four high-end products, Tefal’s Air Force 360 showed the longest performance period, roughly 15 minutes, while LG Electronics’ Code Zero A9 fared the worst, lasting just six minutes when used in maximum power mode. In minimum power mode, Samsung Electronics’ Power Gun lasted longest, with 41 minutes, followed by Dyson’s V8 at 35 minutes and the vacuums from Tefal and LG Electronics at 30 minutes.

Samsung’s lower-end Power Stick was the quickest to charge. While it took just two hours and 15 minutes for the Samsung product to charge, Tefal’s Air Force needed a huge 11 hours and 56 minutes. Tefal’s higher-end Air Force 360, however, needed only two hours and 30 minutes.

Dyson’s V8 created less noise on maximum power mode compared to the other high-end vacuums. Dyson was the only product among the higher-priced models with a noise level below 80 decibels. Tefal’s Air Force 360 was noisiest with 86 decibels, followed by LG’s Code Zero A9 at 84 decibels.

Still, the agency warned not to use vacuum cleaners for removing liquid or flammable products like cigarettes or matches. Not touching electronics, especially touching cords with wet hands, while charging cleaners is another guideline shared by the agency.