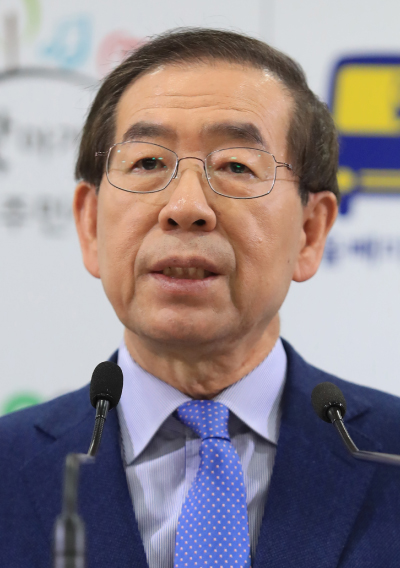 Seoul Mayor Park Won-soon said Sunday that his government would seek the power to ban vehicles based on license plate number during days with bad air pollution to reduce the number of cars running on city roads.

The Seoul Metropolitan Government plans to request an amendment to the enforcement ordinance of the Clean Air Conservation Act that will allow city mayors and provincial governors to issue a directive that bans cars with even- or odd-numbered license plate numbers from operating on certain days with bad pollution.

The request will be sent to the Ministry of Environment, which has the authority to amend the enforcement ordinance.

“The ban will, in effect, be carried out by the local governments of Seoul and surrounding areas,” said Lee Byung-chul, head of the Seoul government’s air quality policy team. “It cannot be carried out by Seoul alone. We have yet to determine the exact system of how we would enforce the ban, such as having checkpoints to stop odd- or even-numbered license plates from entering the capital area, or whether to utilize police and CCTV cameras to enforce the ban.”

There is currently no law in Korea that bans car owners from operating vehicles on days with bad air pollution. The only relevant law applies to public officials, in which the Ministry of Environment and local governments of Seoul, Incheon and Gyeonggi ban half of their civil servants from driving their cars on bad air days. A government study has found that this only reduces cars on the road by about 2 to 3 percent.

Seoul was enveloped in severe air pollution last week, with the highest hourly average of PM2.5 fine dust particles from Jan. 14 to 18 reaching 105 micrograms, according to the Research Institute of Public Health and Environment.

PM2.5 fine dust particles are less than 2.5 micrometers in diameter, about 30 times smaller than the width of a human hair, and can travel through the respiratory tract and reach the bloodstream.

The World Health Organization describes fine dust as carcinogenic and recommends exposure of no more than a daily average of 25 micrograms.

“We know for a fact that other cities like Paris benefitted from such an odd-even vehicle ban on ordinary citizens,” Park said, “and Seoul tried the measure temporarily during the 2002 World Cup, at which point the level of traffic dropped by about 19 percent. I’ve spoken with Environment Minister Kim Eun-kyung about implementing the odd-even vehicle ban during the PyeongChang Olympics, and she gave a positive response.”

The city regularly experiences unhealthy levels of fine dust in the air due to domestic factors like vehicle emissions and factory work, as well as seasonal effects like yellow dust blowing from the deserts of China.

When asked by a reporter during the news conference whether the mayor believes the city is ready for an odd-even vehicle ban, Park said, “Seoul is ready. You can tell by the way it is executing its emergency fine dust reduction system.”

The system, implemented last week, includes alerts sent to people’s phones warning of bad air and the Seoul government providing free public transportation during rush hour on days with bad air. It costs the city some 4.8 billion won ($4.5 million) every day the policy is implemented.

Park said he would stick with the policy despite public criticism over its effectiveness. “Free public transportation to boost use of mass transit over private vehicles was one of the policies suggested by some 3,000 citizens during a public discussion at Gwanghwamun last May,” Park said. “Seoul will continue to strengthen its current anti-pollution policies and devise new ways to combat pollution.”