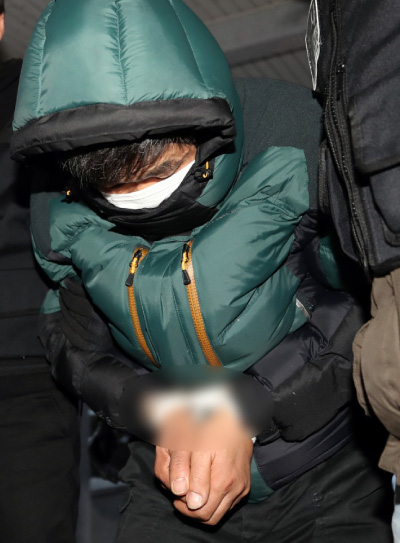 The suspect is taken into Jongno Precinct in Seoul on Saturday afternoon. [YONHAP]

Police detained on Sunday an alleged arsonist who started a fire at a motel in Jongno District, central Seoul, on Saturday, killing six people, including a mother and her two teenage daughters who were on a cross-country trip together.

Four other people staying at the motel remain in the hospital.

The suspect is a 53-year-old man surnamed Yoo who told police he committed arson out of anger after the motel owner refused to call a prostitute on his behalf.

“I asked the motel owner [a 71-year-old woman surnamed Kim] to call a prostitute for me,” he told police. “But when she refused to do it, I set the place on fire in anger.”

Yoo worked at a Chinese restaurant in Jongno District. He had gone drinking with his coworkers late on Friday night and then found the motel on his own in the early hours of Saturday.

“I was drunk and I wanted to buy sex,” Yoo told police. “So I went to the first motel I saw.”

When Kim refused to call a prostitute for Yoo, Yoo called the police around 2:06 a.m., saying the motel was refusing to let him stay there. Police said Kim had called them twice around that time, saying there was a drunken man causing trouble.

A police officer dispatched to the scene at the time warned Yoo that he could be criminally charged for soliciting prostitution.

Yoo then got a cab to a gas station some 2 kilometers (1.2 miles) away and returned with a 10-liter (2.6-gallon) bottle of gasoline.

“He told me that his car had run out of gas, so I sold him the gasoline,” said an employee of the gas station.

Yoo doused the hallway on the first floor of the motel with the gasoline around 3:08 a.m. and lit it on fire, police said.

“I thought he was dousing the floor with water,” Kim told police. “But then there was a sudden explosion and then the whole place was on fire.”

The fire was put out in about an hour after Kim called the fire department, but not before it killed five and injured another five staying at the motel. One of the injured died while being treated at a hospital on Sunday.

Among the six dead are a 35-year-old mother and her 15-year-old and 12-year-old daughters. The three lived in Jangheung County, South Jeolla, and were traveling in Seoul during the daughters’ break from school. The father did not accompany them because he had to work, police said. Friday night was their first night in Seoul.

Authorities requested an autopsy on the six bodies to determine their exact causes of death.

The building, built in 1964, did not have sprinklers installed.

“The building is too small to be legally required to have sprinklers,” said a police officer.