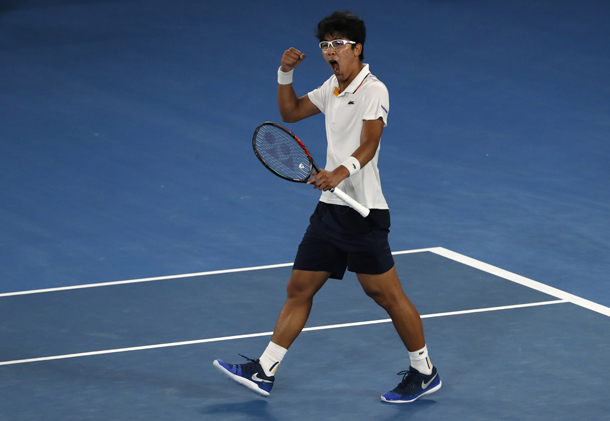 Chung Hyeon celebrates after winning a point against Serbia’s Novak Djokovic during the round of 16 match at the Australian Open in Melbourne, Australia on Monday. [AP/YONHAP]

Chung Hyeon made history with another upset at the 2018 Australian Open, defeating former No. 1 Novak Djokovic of Serbia 3-0 in the round of 16 at Rod Laver Arena in Melbourne on Monday.

Chung’s redemption from his loss two years ago during the first round of the 2016 Australian Open couldn’t have been any better, as he won three straight sets to secure his victory. Chung got off to a great start in the first set, leading the game 4-0. Djokovic quickly caught up to Chung, taking the lead 6-5. But Chung forced the first set to a tiebreak, winning the 7-4.

In the second set, Chung was again leading, this time by 4-1, when Djokovic once again caught up to tie the set. Chung didn’t slow down, winning the second set 7-5. After winning another tiebreak 7-3 in the third set, Chung captured his victory against the 14th ranked player.
With the advancement to the quarterfinals, Chung has guaranteed himself a prize of $600,000 as well as 360 ranking points. Ranking points are expected to boost Chung’s world ranking, as he is likely to be ranked inside the top-40 at the end of the tournament.

Chung has now made Korean tennis history, advancing further than any Korean player in a grand slam tournament. The record was previously held but Lee Hyung-taik who reached the round of 16 at the 2000 and 2007 U.S. Open.

Chung will face Tennys Sandgren, ranked 97th in the world, on Wednesday. Sandgren beat world No. 5 Dominic Thiem of Austria in the round of 16 on on Monday.