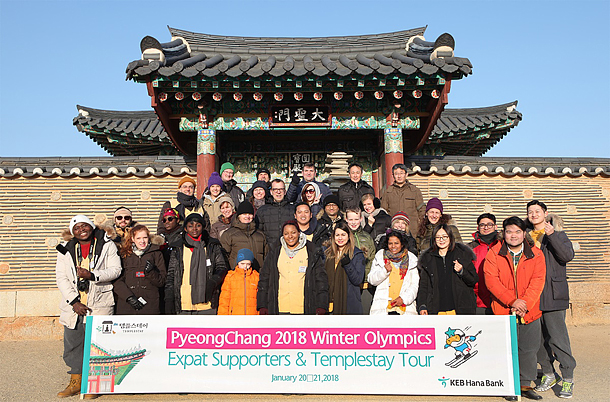 KEB Hana Bank, an official sponsor of the PyeongChang Winter Games, joined the Olympic hype over the weekend, offering a temple stay tour for its expat clients to celebrate the upcoming sports event.

Clients and their families participated in a two-day event that kicked off on Saturday at the bank’s headquarters in Myeong-dong, central Seoul, where they rode a virtual reality bobsled and tried their hand at curling in the bank’s lobby, which had been turned into a “PyeongChang 2018 Winter Games Experience Zone.”

The group then traveled to Pyeongchang County, Gangwon, the site of the Games, and toured Olympic venues including the ski jump. They then headed to nearby Naksan Temple in Yangyang County, where they experienced Buddhist traditions like a tea ceremony and prayer bead making.

“It felt great to experience Korea’s traditional culture, away from the hectic routine, at Naksan Temple, surrounded by the mountains and the sea,” said Laura McLuckie, a Scottish expat. “I also very much enjoyed visiting the Olympic stadiums a few weeks before the Games begin, to wish for their success with people from different countries.”

A KEB Hana Bank official said the company organized the event to provide an opportunity for its foreign clients to have a better understanding of Korean culture while promoting the Winter Olympics next month.

The bank has been providing temple stay programs for its foreign clients since 2011 after it signed a partnership with the Culture Corps of Korean Buddhism, a nonprofit with access to 123 temples around the country.