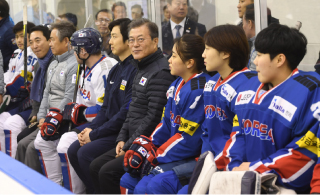 At the PyeongChang Winter Olympics, 23 South Koreans and 12 North Koreans will compete as one ice hockey team after the International Olympic Committee allowed the roster to expand to 35 instead of the usual 23. Twenty-two athletes can play in each game, and three North Koreans will be included in each match. The team will play under the acronym COR, the anthem will be “Arirang” and the flag will be the Korean Peninsula flag.

Prime Minister Lee Nak-yon said at a news conference on Jan. 16 that since the women’s hockey team is not eyeing a medal, South Korean players will not be affected. The joint team was approved despite negative public opinion, with one survey showing 72.2 percent of people thought the government did not need to push for a joint team at the cost of our players.

Regardless of result, the joint team will not likely earn praise. If a team with 35 members beats a team of 23, there will be controversy. Switzerland, which is in the same group as Korea, has raised concerns about fairness.

If the joint team loses, it will lead to debate over who is responsible. Past joint teams at the World Table Tennis Championship and FIFA World Youth Championship in 1991 earned praise only because the table tennis team won the championship and the football team advanced to the quarterfinals.

During a visit to the national training center in Jincheon on Jan. 17, President Moon Jae-in said the joint team would be a good opportunity to bring attention to unpopular sports. But with men’s hockey still unpopular in Korea, it is doubtful that anyone might lead the initiative after the PyeongChang Olympics. Lee Eun-young, mother of the women’s hockey team member Park Chae-rin, said, “After PyeongChang, we will go back to ‘a league of our own.’” Her view seems more realistic and honest.

On Jan. 19, the minister of culture, sports and tourism, Do Jong-hwan, announced that under the policy to continue a reconciliatory mood, the government is planning a joint entrance at the Jakarta Palembang Asian Games in August. Minister Do said a joint team could also be discussed.

We don’t need to wait until August. The FIFA World Cup is coming up in June, and with the reconciliatory mood, football should not be excluded. South Korea is currently ranked 59th, and there is slim chance of advancing to the semifinals.

Inter-Korean meetings should be held on football with consultation from FIFA. The acronym, anthem and flag can follow the precedence of the Olympics, but there are other things to discuss like expanding the roster and giving full authority to South Korean Coach Shin Tae-yong.

*The author is deputy sports news editor of the JoongAng Ilbo.