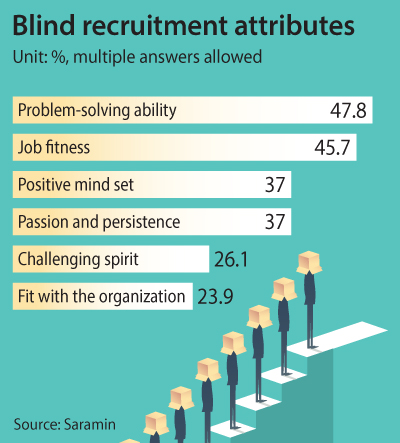 One out of five private companies will implement the so-called blind hiring system this year, according to a survey released Monday.

The Moon administration has been pushing to spread this practice, saying that some of the information considered “spec” was irrelevant to a candidate’s capacity to do a job and moreover could encourage prejudice from recruiters. Blind recruitment is a must-do for government organizations and state-run companies, but the system is still an option in the private sector.

Only 9.5 percent of respondents to the survey said they have already applied the blind hiring system.

Among the companies that said they would introduce the system this year, 67.4 percent said the decision was made in order to assess candidates based on their actual ability. Multiple answers were allowed.

Around 19 percent said that they did not see a correlation between having a good spec and strong job performance based on previous hiring experience. Some companies said they wanted to put a candidate’s personality before spec - an answer that accounted for 37 percent.

The ability that is valued the most among blind recruits is problem-solving skills, at 47.8 percent. Fitness to do the job came second at 45.7 percent. A positive mind set and persistence both came third at 37 percent.

However, there seemed to be a consensus that a good spec didn’t always lead to good employees.

A total of 72.1 percent of respondents said the two factors were not proportional to each other. A little less than a half, 47.7 percent, of all 222 companies said they intend to apply blind recruitment in the future.