SK upgrades T map to use its virtual assistant

SK upgrades T map to use its virtual assistant 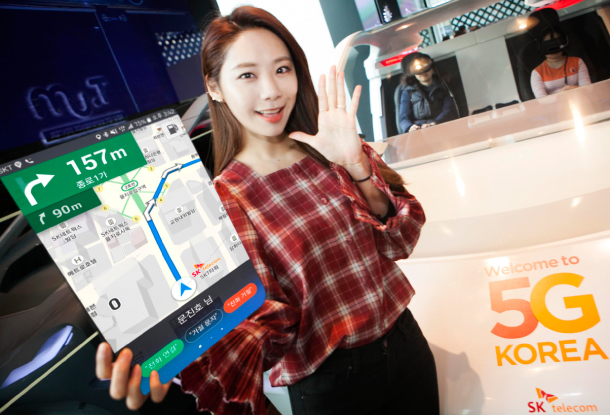 A model holds a screenshot of SK Telecom’s Nugu being used with the T map navigation app. [SK TELECOM]

When you use a navigation app while driving, phone calls are tricky to take. While chatting, you lose the map.

SK Telecom will solve that problem with a software upgrade to its T map app available today. After the upgrade, the map will remain on display even when the driver is making a phone call.

The upgrade will also allow drivers to use voice commands to make or reject phone calls or leave text messages such as “I will call you later because I am driving now” using a built-in artificial intelligence app, Nugu.

Nugu is virtual assistant similar to Amazon’s Alexa and Apple’s Siri. The app is displayed at the lower right side of the T map and is summoned with either the push of the button or the speaking of one of four activation cues - Aria, Crystal, Rebecca, and Tinkerbell.

Nugu also comes as a standalone smart speaker for the home.

SK, Korea’s No. 1 mobile operator, is also improving the navigation app by letting drivers use voice commands to add up to two more stops en route than previously, change the route, launch a podcast app, check the current location and the time left to the destination. The upgraded app can even send a text message about the driver’s location or arrival time. The upgrade involves 11 changes.

“The upgrade is meant to enable drivers to check or share information by voice command that previously required them to actually look at the device and get distracted,” said an SK Telecom spokesman at a press briefing on Monday.

The upgrade will be initially available on eight recent smartphones - the Samsung Galaxy Note8, A7, S7, Note5 and LG G6, V20, G5 and Q6 - but not with any iPhone until June.

SK has been trying to expand the use of Nugu. Nugu’s monthly active users totaled 110,000 last August, 11 months after its launch in the form of a smart speaker, and increased nearly 20 times in just four months to 2.11 million as of December. The company now aims to achieve 5 million monthly active users by the end of this year.

In a related vein, the company is in talks with local and global automakers such as Hyundai Motor, Renault Samsung, Land Rover, Ford and Jaguar to include T map with Nugu in their vehicle’s built-in navigation systems.