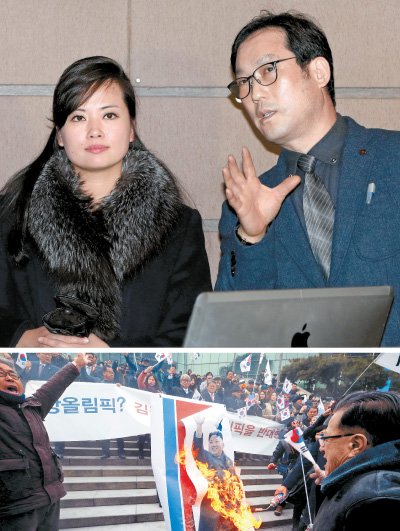 The seven-member delegation from North Korea that crossed over the border Sunday to check local facilities for two concerts next month traveled back to Seoul on Monday from Gangneung, Gangwon, visiting three venues before returning to the North.

The group, led by Hyon Song-wol, leader of the Samjiyon Orchestra, toured the Seoul Metropolitan Office of Education Student Gymnasium, locally known as the “Jamsil student gymnasium,” in Songpa District, southern Seoul, as well as the Jangchung Arena and the National Theater of Korea, both in Jung District, central Seoul.

The delegation spent about an hour and a half at the National Theater, the longest for all three tours, according to pool reports. In the first two gyms, they spent less than 15 minutes.

Hyon will likely debrief Pyongyang officials and make a final decision in the coming days, as both Koreas agreed last week that the North’s Samjiyon Orchestra will perform once in Seoul and Gangneung, one of three places in Gangwon where the Games will be held.

On Sunday, the group took a road linking the two countries near the west coast, arriving at South Korea’s Customs, Immigration and Quarantine (CIQ) office in Paju, Gyeonggi, at around 9 a.m.

Guarded by local police and agents from the National Intelligence Service, Hyon and her teammates took a limousine bus to Seoul Station before riding a KTX bullet train to Gangneung.

They spent a scant five to 10 minutes at the Hwang Young-cho Gymnasium in Gangneung Myeongnyun High School, and nearly two and a half hours at the Gangneung Arts Center, before spending a night in the Golden Tulip Skybay Hotel.

Hyon and her delegation returned to Seoul on a KTX bullet train Monday morning.

The Samjiyon Orchestra leader, once rumored to be North Korean leader Kim Jong-un’s ex-girlfriend, barely made any remarks to South Korean media during her stay here, though pool reporters from the Unification Ministry were told by a local guide that she asked, “Why are there so many people wearing masks?” on Monday morning inside the KTX.

The guide replied that it was due to fine dust pollution.

When Hyon arrived back at Seoul Station, some 50 members of the far-right Korean Patriots Party held a protest rally nearby, burning the North Korean flag, the Korean Peninsula flag and a portrait of Kim Jong-un.

The Korean Peninsula flag refers to a white flag with a blue silhouette of the peninsula in the middle, which both countries’ athletes will march behind during the opening ceremony of the PyeongChang Olympics on Feb. 9.

At Seoul Station, police doused the fires and prevented the protesters from interacting with the North Korean delegation as it passed. The Namdaemun Police Precinct said it was investigating the political party for violating demonstration laws by failing to report the protest to authorities in advance.

Among the protesters were Rep. Cho Won-jin, leader of the Korean Patriots Party and a third-term lawmaker representing the Dalseo District of conservative stronghold Daegu. Cho is a strong supporter of ousted President Park Geun-hye.

Today at 9:30 a.m., South Korea’s own group of 12 inspectors, led by Lee Joo-tae, director general of the Unification Ministry’s Inter-Korean Exchange and Cooperation Bureau, will cross into North Korea by taking a road connecting the two countries along the east coast.

For three days, the delegation will check facilities at the Mount Kumgang resort, where a joint cultural event will be held soon, and the Masikryong Ski Resort, where South Korean skiers will share know-how with North Korean skiers.

A second group of North Korean inspectors is scheduled to arrive Thursday, staying until Saturday to examine local accommodations, stadiums and Olympic press centers for visiting athletes, cheerleaders and reporters.