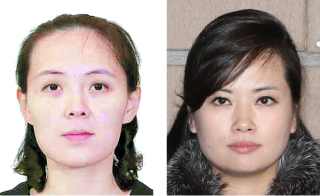 North Korean leader Kim Jong-un’s younger sister, Kim Yo-jong, has been promoted to first deputy director of the powerful Organization and Guidance Department within the Central Committee of the ruling Workers’ Party, another sign that Kim Jong-un is solidifying his grip on power by swapping remnants of the former leadership with his own picks.

A senior official in South Korea’s ruling Democratic Party told the JoongAng Ilbo Sunday that Kim Yo-jong, who formerly served as deputy director of the Propaganda and Agitation Department, appears to have been appointed to her new role last October, around the time when she was named an alternate member in the Workers’ Party’s Politburo during the second plenary meeting of the 7th Central Committee.

A candidate member does not have a vote but is allowed to participate in debates on key issues. The Organization and Guidance Department generally has overall personnel control on senior officials in the party and military. The Propaganda and Agitation Department is in charge of promoting and legitimizing the North Korean regime.

Another official in the South’s Democratic Party told the JoongAng Ilbo that Kim Yo-jong’s old job has been secured by Hyon Song-wol, leader of the North’s famed Moranbong Band, who was once rumored to be Kim Jong-un’s ex-girlfriend. Hyon led a seven-member delegation to Seoul and Gangneung, Gangwon, on Sunday and Monday to check local facilities for two orchestra concerts next month before the PyeongChang Winter Olympics.

According to the Democratic Party source, who informed the paper about Kim Yo-jong’s promotion, a change in her political standing was first hinted late last year when she began to be featured in North Korean media sitting close to her brother in official gatherings.

“Former rulers Kim Il Sung and Kim Jong-il took up the role of director of the Organization and Guidance Department themselves,” said the official. By promoting Kim Yo-jong to first deputy director, “It could be that Kim Jong-un is trying to contain Choe Ryong-hae, the current department director, since he’s not from the Kim family.”

With regard to Hyon, the second Democratic Party source said it appears she was promoted last October. According to a South Korean government official, Kwon Hyok-bong, director of the Arts and Performance Bureau in North Korea’s Culture Ministry, who led a four-member delegation to a meeting with South Korea on Jan. 15, was seen addressing Hyon as “comrade leader.”

Hyon was introduced to the South as the leader of the Samjiyon Orchestra. It appears “comrade” refers to her position as deputy director of the Propaganda and Agitation Department, since Kwon is known to have the same title.