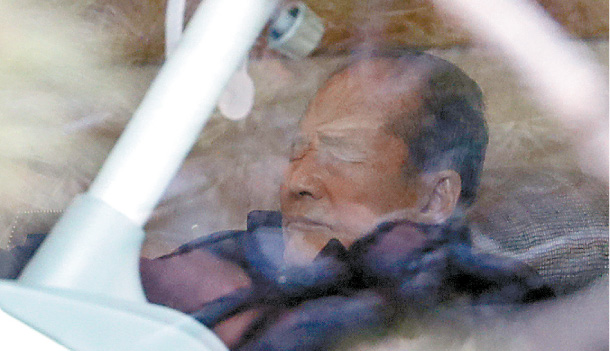 Lee Sang-deuk, elder brother of former President Lee Myung-bak, is seen in his home in Seongbuk-dong, northern Seoul, on Monday while investigators from the prosecution raid and search it. [YONHAP]

The probe into corruption in the Lee Myung-bak administration touched the former president’s family Monday as his elder brother became the target of raids.

The Seoul Central District Prosecutors’ Office carried out simultaneous raids of Lee Sang-deuk’s office in Yeouido, western Seoul, and home in Seongbuk-dong, northern Seoul, to look for evidence to back allegation that he received money from the National Intelligence Service (NIS). A former senior NIS official reportedly told prosecutors that the 83-year-old former lawmaker took money from the spy agency when his younger brother was president.

The probe into the NIS’s alleged misappropriation of secret operations funds began with the suspicion that Won Sei-hoon had misused the money when he headed the spy agency from 2009 till 2013. Prosecutors noticed that some of the money was sent to the Lee Blue House and Lee Sang-deuk.

Kim Ju-seong, who served as planning and coordination director of the NIS from 2008 until 2010, was also questioned about the suspected misappropriations. He was a close associate of Lee Sang-deuk.

Before joining the NIS, Kim worked 35 years for the Kolon Group, once headed by Lee Sang-deuk. When Kim was named to the powerful post overseeing internal affairs of the NIS without any experience in intelligence, speculation was high that the president’s brother was behind the appointment.

Kim was suspected of arranging money transfers from the NIS to the Blue House in 2008. Sources in the prosecution have also said that Kim had an exclusive meeting with then-President Lee in 2008 to express concerns about the diversion of NIS funds.

Lee Sang-deuk, a former six-term lawmaker, was one of the most powerful figures in the Lee administration. He, however, was involved in a series of graft scandals. In 2012, he was indicted on charges of receiving bribes from two savings banks, and the Supreme Court upheld his conviction in June 2014. He served a 14-month prison term.

He was also prosecuted in October 2015 on a charge of receiving about 2 billion won ($1.87 million) in bribes from steelmaker Posco. Lee has appealed a conviction in that case.

The investigation into the NIS fund scandal is speeding up after a former personal secretary of Lee’s, Kim Hee-jung, became a cooperating witness for the prosecution. Kim reportedly testified that he received 100 million won from the NIS before the president and his wife visited the United States in 2011. He said he bought U.S. dollars and delivered them to an aide of then-First Lady Kim Yoon-ok. He made public the same statement in a media interview last week.

Local media reported Monday that a former staffer of the First Lady’s office was recently questioned about that allegation. The staffer, who assisted Kim Yoon-ok in 2011, was questioned with Kim Hee-jung to cross-check their testimonies, according to Yonhap News Agency.

According to the report, the staffer, who used to work in the presidential residence in the Blue House, denied some of the allegations, but backed up some others. Speculation grew that a summoning of the former first lady is imminent.

The prosecution is also investigating another allegation that the Lee Blue House used money from the NIS to silence a whistle-blower.

Jang Seok-myeong, a former presidential secretary in charge of public discipline, was questioned on Monday on a suspicion that the Lee Blue House used NIS money to pay off a whistle-blower. In March 2012, Jang Jin-su, an official of the Prime Minister’s Office’s public ethics office, disclosed that his office conducted illegal surveillance of people critical of the Lee administration. He also said the Blue House had ordered the destruction of any evidence of the operation and attempted to pay him 50 million won as hush money.

At the time, Justice Minister Kwon Jae-jin, Presidential Chief of Staff Yim Tae-hee, Presidential Civil Affairs Secretary Kim Jin-mo and Jang Seok-kyeong were suspected of being involved in the failed attempt to silence the whistle-blower. But two investigations in 2012 and 2013 failed to prove their involvement.

The case has been reopened as the prosecution now suspects that the misappropriated NIS money was the source of the attempted payoff. Mok Yeong-man, who served as planning and coordination director of the NIS from 2010 to 2013, reportedly admitted that he had delivered money from the secret operations funds to Kim Jin-mo. Kim was taken into custody last week.

Jang Seok-myeong was questioned earlier as a witness but denied his charges. The prosecution, however, obtained testimony from a former official of the Prime Minister’s Office that he had received the money and delivered it to Jang Jin-su. The former Blue House aide was questioned Monday as a suspect.