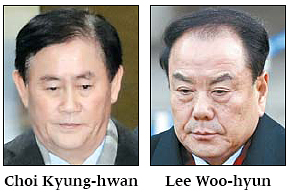 Seoul Central District Prosecutors’ Office said Reps. Choi Kyung-hwan and Lee Woo-hyun of the Liberty Korea Party will stand trial for accepting kickbacks from the National Intelligence Service (NIS), and a local government official and businessmen, in return for favors. Choi, a former finance minister, has been charged with bribery, and Lee with bribery and violation of the political fund law, the court said. Both were arrested early this month.

Choi, 63, is suspected of taking 100 million won ($93,500) from the spy agency in 2014 in exchange for exerting influence to keep the budget intact for the NIS’ off-books fund, known as the “special activities fund.” Choi was deputy prime minister for economic affairs and finance minister at the time.

The opposition bigwig is also accused of asking the NIS to increase the amount of funds the agency illegally provided to the Blue House the same year, when former president Park was in office. Lee is accused of receiving 13.1 billion won between 2014 and 2016 from a former city council chief and local businessmen in his constituency.

Prosecutors believe he took the graft from the council head in the provincial city of Namyangju, who was seeking his influence to win mayoral candidacy ahead of the 2014 general elections. The businessmen who paid him allegedly wanted him to pull strings in their favor to win business opportunities in some key social infrastructure projects. Prosecutors said they will also seek to forfeit the illegal funds through the court proceedings. Choi and Lee have denied any wrongdoing.