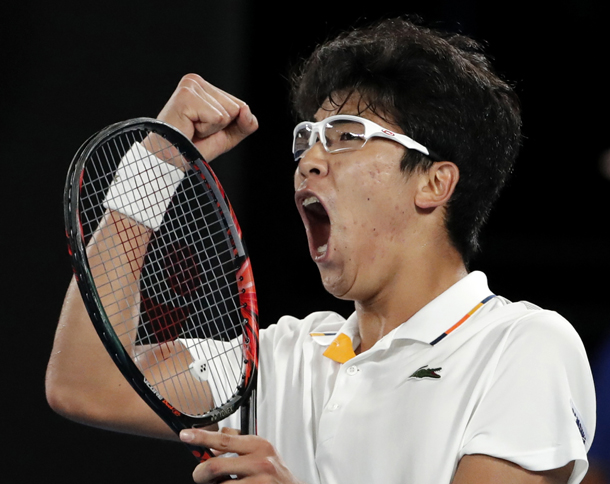 Korean tennis player Chung Hyeon defeats Novak Djokovic of Serbia 3-0 in the round of 16 at Rod Laver Arena in Melbourne on Monday. [YONHAP]

Chung Hyeon made history with an upset at the 2018 Australian Open, defeating former No. 1 Novak Djokovic of Serbia 3-0 in the round of 16 at Rod Laver Arena in Melbourne on Monday.

Chung’s redemption from his loss two years ago during the first round of the 2016 Australian Open couldn’t have been any better, as he won three straight sets to secure his victory. Chung got off to a great start in the first set, leading the game 4-0. Djokovic quickly caught up, taking the lead 6-5. But Chung forced the first set to a tiebreak, winning 7-4.

In the second set, Chung took an early lead again, this time up 4-1 when Djokovic once again caught up to tie the set. Chung didn’t slow down, winning the second set 7-5. After winning another tiebreak 7-3 in the third set, Chung captured a historic victory against the world No. 14.

“Novak [Djokovic], Roger [Federer] and Rafa [Nadal] are my role models, my idols,” Chung was quoted as saying on the Association of Tennis Professionals (ATP) website. “I’m just happy to play with Novak again. I’m just honored to see him again on the tour. Today my dreams come true. [The win is a] victory for my country, I think tennis [is] coming up after this.” 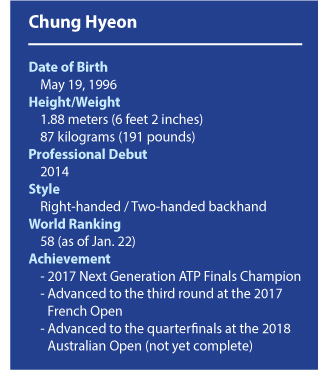 With the advancement to the quarterfinals, Chung has guaranteed himself $600,000 in prize money as well as 360 ranking points. Ranking points are expected to boost Chung’s world ranking, as he is likely to be ranked inside the top-50 once again by the end of the tournament. In November 2017 Chung peaked at No. 44, but his current world ranking is 58.

“Congratulations to Chung and his team - amazing,” Djokovic was quoted as saying on ATP. “[An] amazing performance. He was a better player on the court tonight. He deserved to win, no question about it. Whenever he was in trouble, he came up with some unbelievable shots, passing shots. Just from the back of the court, he was like a wall. It was impressive.”

Chung has now made Korean tennis history, advancing further than any Korean player in a Grand Slam tournament. The record was previously held by Lee Hyung-taik, who reached the round of 16 at the 2000 and 2007 U.S. Open.

“He definitely has the game to be a top-10 player, without a doubt,” Djokovic was quoted as saying on ATP website. “How far he can go, that depends on him. Obviously, I respect him a lot because he’s a hard worker, he’s disciplined, he’s a nice guy, he’s quiet. You can see that he cares about his career and his performances. So I’m sure that he’s going to get some really good results in the future.”

The Australian Open marked Djokovic’s first outing since the Wimbledon Open in July 2017, taking a break from an elbow injury. Throughout the long match against Chung, Djokovic seemed as if he hadn’t fully recovered from his elbow injury as he required on-court treatment. However, Djokovic spoke little of his injury when asked about it after the match, saying, “I don’t want to talk about my injury tonight, because then I’m taking away from Chung’s victory, the credit that he deserves.”

In 2016, Chung played against Djokovic, who was then the top-ranked player, in the first round of the Australian Open, but lost 0-3. At the time, Chung was only in his third year playing professionally on the ATP Tour.

But within two years Chung came a long way. In November 2017, Chung picked up his first professional win at the Next Generation ATP Finals. Djokovic also spoke highly of Chung’s improvement since the last time the two played. Djokovic believes that Chung’s experience of having played against top ranked players has helped him gain confidence and experience in addition to the physical strength Chung gained over a year.

Chung will face American Tennys Sandgren, ranked 97th in the world. Sandgren’s victory was probably the biggest surprise of this year’s Australian Open, as Sandgren beat world No. 5 Dominic Thiem of Austria in the round of 16.

“He’s a really good player,” said Chung. “I think he made [his] first quarterfinal… like me,” Chung was quoted as saying on the ATP website. “I’m just ready for him. I played him before one time. We know how to play each other. I have to be ready.”

Chung played against Sandgren in the round of 32 at the ATP Auckland Open, where Chung won 2-1. Sandgren does not have a professional win and his highest world ranking was 85th in November, 2017.

The winner of the match is likely to meet world No. 2 and defending champion Roger Federer in the semifinals, who is also scheduled to play a quarterfinals match today against No. 19 Tomas Berdych.

“I’m thankful to the fans in Korea for watching my match,” Chung said. “But the tournament is not done yet. I’ll try to play better [in the quarterfinals] so I hope they cheer me on.”

Chung’s quarterfinals match against Sandgren will be broadcast live on JTBCFOX3 SPORTS today.