For North Korean athletes, odds are stacked against them

For North Korean athletes, odds are stacked against them 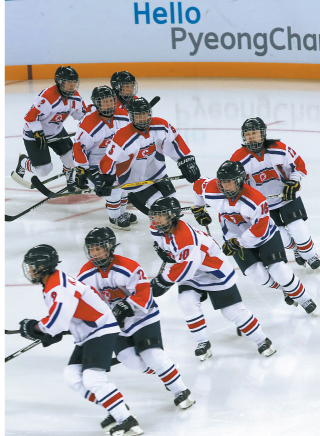 The North Korean women’s ice hockey team warms up before a game at the 2017 Ice Hockey World Championship in Gangneung, Gangwon, on April 3. [YONHAP]

The International Olympic Committee has approved 22 North Korean athletes to compete at the PyeongChang Winter Games next month, but their chances of medaling are slim to none. A majority of the athletes have almost no experience in international competitions, and most of them will likely finish last in their events.

Among them, the figure skating pair of Ryom Tae-ok and Kim Ju-sik is expected to have the best performance. The two finished sixth at the Nebelhorn Trophy in September 2017, allowing them to qualify for the Winter Olympics, but they failed to register by the deadline, and their spot was passed on to the Japanese pair. With IOC approval, the North Korean pair will participate as a wild card.

North Korea’s two-short track speed skaters, Jong Kwang-bom and Choe Un-song, will also compete in their sport as a wild card. Jong will skate in the men’s 1,500-meter race and Choe in the 500-meter race, but they are unlikely to medal. There have been four International Skating Union World Cup events so far this season, but Jong and Choe have only competed in two. To be considered for the Olympics, athletes must have results from at least three events lest they receive a wild card.

While the skaters have some international experience, the six North Korean skiers are almost unknown. Although they are with the International Ski Federation, they are way behind top-ranked skiers, falling outside the top 1,000 in the world. North Korea has 16 registered alpine skiers and eight in cross-country.

Of the skiers participating at the Olympics, Kim Ryon-hyang, who competes in alpine, has the highest ranking, at 1,910. She competed at the federation’s Super G race at Darbandsar, Iran, in March and finished eighth among 11 participating skiers. The other two alpine skiers, Choe Myong-gwang and Kang Song-il, both men, are ranked 3,203 and 3,496.

Throughout North Korea’s history, only one cross-country skier has competed in the Olympics, at the 1964 Innsbruk Games, and only one alpine skier has participated in the Games, at Albertville in 1992, where Choi Mi-ok finished 38th in the women’s slalom race but did not complete the giant slalom.

Although a majority of the North Korean athletes competing in the PyeongChang Olympics are virtual unknowns, they could also become the biggest upset at the Games.

At the 1996 Summer Olympics in Atlanta, North Korean judoka Kye Sun-hui won gold in the women’s 48-kilogram division, an impressive feat considering she competed in the Games as a wild card.