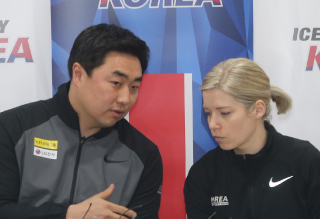 30-year-old Sarah Murray is the head coach for the Korean women’s national ice hockey team for the PyeongChang Winter Olympics. The Canadian — who has been with the team for four years — trains the players in unusual ways. One of her peculiar techniques is a pantomime game. A player is given a message which she has to convey with facial expressions and gestures. Her teammates must figure out the message. It is a way of training players to communicate during the game, in which pucks move at a speed of 200 kilometers (124 miles) per hour.

Forming a joint women’s national hockey team with North Korea has generated a very heated controversy that suggests a crucial lack of empathy by the government. The authorities did not consider the special nature of sports — especially ice hockey. Their biggest mistake was to think that including the best players from South and North Korea would make the joint team better. Prime Minister Lee Nak-yeon said, “Some Korean players also think that they can win by adding talented North Korean players.”

Such thinking is understandable as three joint teams of the past were successful. At the World Table Tennis Championship in Chiba, Japan, in 1991, the Korean women’s double team beat an allegedly unbeatable Chinese team. In June of the same year, a unified soccer team also pulled off a great result at the FIFA World Youth Championship in Portugal. The Korean team beat Argentina and advanced to the quarterfinal. At the 2011 Qatar Peace and Sport Table Tennis Cup, the men’s team won the title, and women’s team finished in second place.

But it is a miscalculation to expect such a success in ice hockey, which is different from other sports. Among the three unified teams of the past, two were table tennis, which is basically an individual match. Double games also have two players alternate.

However, ice hockey requires teamwork perhaps more than any other sport. Six players are on the ice, and 22 players alternate as the sport is so exhausting. A player who commits a foul needs to leave the ice for a while. The roles and strategies need to change according to the situation. It would be nearly impossible for the North Korean members to learn all the strategies for each position in such a short period of time.

When asked about concerns about the unified team, former head coaches simply mentioned “teamwork.” Players need to cooperate and have solid teamwork to win. It requires absolute trust to pass to a teammate in a better position even when one is given a chance at a goal. It takes time to build trust with other players and polish the teamwork.

Teamwork was also important for the joint youth soccer team, and it was successful for a reason. In 1991, the unified team was agreed upon four months before the tournament, followed by joint training in South and North Korea, which began 40 days before the matches.

This time, the ice hockey team gets a maximum of two weeks. The single team will play against Sweden (fifth place in the world ranking), Switzerland (sixth) and Japan (ninth). They are all ranked far higher than Korea’s 22nd place. Korea is determined to defeat Japan, but without teamwork, it can hardly happen.

In “Strength to Love,” Martin Luther King Jr. wrote, “Nothing in all the world is more dangerous than sincere ignorance and conscientious stupidity.” If the joint team loses to Japan, how will the authorities deal with the criticism that they rushed to form a single team and ruined the result?

The joint team cannot be changed. For the best possible outcome, experts say two things are necessary. First, both South and North Korean athletes need to be convinced of the tough situation. Otherwise, they won’t have teamwork. As head coach Murray wishes, the joint team needs to meet as soon as possible to build their teamwork.