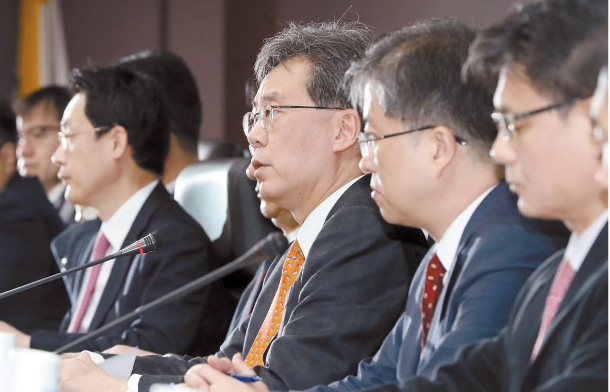 Trade Minister Kim Hyun-chong, third from right, says Seoul will file a petition with the World Trade Organization to protest the U.S. government’s decision to impose safeguard tariffs on imported washing machines and solar cells at an emergency meeting in Seoul Tuesday.[Yonhap]

“We will file a petition to the World Trade Organization against the unfair penalties,” said Trade Minister Kim Hyun-chong in an emergency meeting Tuesday in Seoul. “We plan to immediately request bilateral talks with the United States.”

U.S. Trade Representative Robert Lighthizer announced Monday that President Donald Trump had approved recommendations to impose safeguard tariffs on imported washers and solar cells and modules based on an investigation by the U.S. International Trade Commission.

“The U.S. International Trade Commission found that U.S. producers had been seriously injured by imports and made several recommendations to the president,” said Lighthizer in a statement Monday. “The president’s action makes clear again that the Trump administration will always defend American workers, farmers, ranchers, and businesses in this regard.” 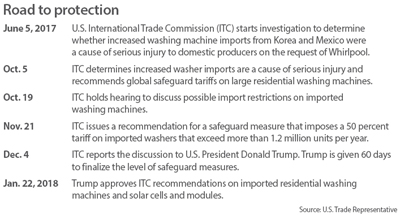 Parts for washing machines are also subject to tariffs. For imported parts outside a quota of 50,000 units in the first year, a 50 percent tariff will be applied.

Trade Minister Kim expressed regret over the U.S. decision and said it was not reasonable under the basic principles set out by the WTO.

“For a safeguard measure to be exercised, there needs to be a sudden surge in imports, massive injury in the domestic industry and a clear causal relationship between the two,” Kim said. “However, considering [Whirlpool’s] market share and operating margins, it is hard to assume there was serious damage to local businesses and there hasn’t been a sudden surge in washer imports.”

Kim added that based on his experience as a former member of the WTO Appellate Body, Korea is likely to win a suit against the U.S. government’s import restrictions on both washers and solar panels.

Kim served as a member of the WTO body that contributes to settling disputes between WTO members until he resigned to join the Korean government last August.

Samsung Electronics said the decision was a “great loss” for American consumers in a statement Monday.

“This tariff is a tax on every consumer who wants to buy a washing machine,” the Korean electronics giant said. “Everyone will pay more, with fewer choices.”

Even industry players inside America have criticized the decision by the U.S. government.

According to the U.S. Solar Energy Industries Association on Monday, the association and its members are disappointed with the Trump’s decision on solar cells, which it said will effectively cause the loss of roughly 23,000 American jobs this year, including many in manufacturing.

“While tariffs in this case will not create adequate cell or module manufacturing to meet U.S. demand, or keep foreign-owned Suniva and SolarWorld afloat, they will create a crisis in a part of our economy that has been thriving,” said Abigail Ross Hopper, the association’s president and CEO.

Electronics giants Samsung and LG will focus on expanding production in America. Samsung will expand washing machine production at its factory in Newberry, South Carolina, which started operation from Jan. 12. LG will speed up construction of a Tennessee washing machine facility with hopes of starting production by the fourth quarter of this year, faster than the original schedule.

Korean solar cell providers will look into diversifying their markets.