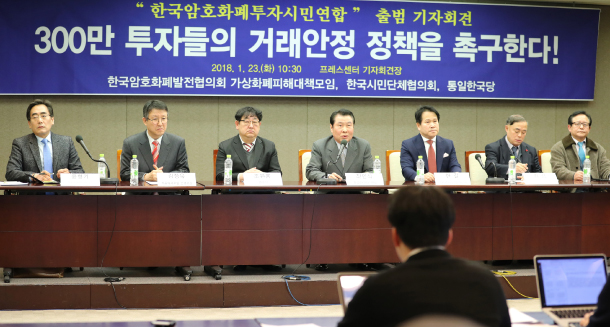 Members of an association representing cryptocurrency investors hold a press briefing to announce the launch of the group at the Press Center in central Seoul Tuesday, when the Financial Services Commission approved the issuance of new accounts for cryptocurrency trading. The association vowed to protect the rights of investors. [YONHAP]

The financial authorities in Korea will allow local banks to issue new accounts for cryptocurrency trading from Jan. 30 and impose a new set of rules to toughen scrutiny over trading.

The move, announced Tuesday, is likely to bring an influx of new cryptocurrency traders into the market, the first time since the government banned the use of anonymous accounts at the onset of the year because of the perceived risks and steep fluctuations associated with the trading.

Under the new measure, new users of bitcoin exchanges must open individual bank accounts under their real names, a process that typically requires a visit to a bank. If a user is already a customer of the bank that works with a specific exchange, they will not need to create a separate new account in order to trade on that exchange.

Banks will be banned from offering such corporate accounts to exchanges.

Instead, six banks, including Shinhan Bank, Nonghyup Bank and the Industrial Bank of Korea, will embrace a new account system that complies with the government’s guidelines for the local exchanges on Jan. 30. The commercial banks previously halted their involvement in cryptocurrency trading following the regulator’s recurrent warnings against the frenzy surrounding cryptocurrencies such as bitcoin and Ethereum.

But unlike before, when the owner of virtual accounts was unclear, the owner of the newly issued accounts will be identified through a verification process that requires proof of identification such as a driver’s license. This will allow the government to collect data on the transactions of individual trader, which could be used as a way to collect tax.

Minors and foreigners, for whom trading in Korea was banned, will still be unable to trade at local exchanges even if they make their own individual accounts.

Banks should report cryptocurrency transactions worth over 10 million won ($9,300) to the Financial Intelligence Unit (FIU), a body under the Financial Services Commission that monitors illegal financial activities such as money laundering and terrorist financing. Kim said that the 10 million won threshold is high enough to raise suspicions of dubious dealing.

“Banks need to report to the FIU, if there is a reasonable basis [for doubt],” he said.

Kim also pointed the finger at exchanges and banks, as the regulator found some questionable practices during on-site investigations that took place between Jan. 8 and Jan. 16.

“We’ve found that some exchanges sold virtual accounts to other exchanges,” Kim said.

In a separate case, a cryptocurrency exchange disguised itself as an online shopping mall in order to be issued with corporate accounts.

The bank that provided the account to the exchange lacked a verification system to work out the deceit, Kim said, while declining to name the bank.

The approval of new bank accounts is seen as a less strict stance than observers expected, as some predicted that the government will impose an all-out ban on new accounts.

The government has been taking a draconian stance against cryptocurrency trading in Korea to cool down the market before the bubble bursts. On Dec. 28, it announced a regulatory measure banning the creation of anonymous accounts.

But the government might also be feeling the heat as officers from the Financial Supervisory Board have been found to be involved in insider trading of cryptocurrencies by selling off their holdings before government announcements of different regulations.