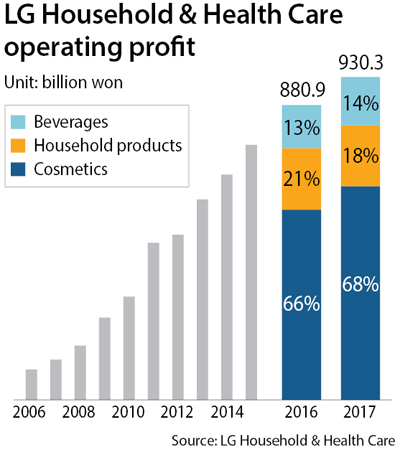 Despite a Chinese boycott of Korean goods last year, LG Household & Health Care made a record operating profit in 2017, and its revenue is set to surpass that of rival AmorePacific for the first time in three years.

The retailer of cosmetics and household products posted a 930.3 billion won ($865.2 million) operating profit on Tuesday, showing growth of 5.6 percent from 2016. Annual revenue was 6.2 trillion won, up 2.9 percent from the previous year.

The performance was the best since the company was founded in 2001 and could exceed that of AmorePacific. According to financial services firm FnGuide, AmorePacific is expected to post 5.2 trillion won in revenue. Its official earnings report is set to be released in February.

Premium brands like Whoo, Ohui and Su:m37 played a vital role in driving the company’s performance. Sales in the cosmetics department, which includes the three brands, jumped 4.9 percent last year compared to the previous year to total 3.3 trillion won. The department’s operating profit was 636.1 billion won, an improvement of 10 percent.

If the estimates play out, it will be the first time Whoo has outperformed Sulwhasoo since the LG brand was created in 2003.

Despite the gains in its cosmetics department, analysts believe that a diverse product line helped LG Household & Health Care weather the worst excesses of a Chinese boycott that stemmed from Beijing’s protest of a U.S. missile defense system on Korean soil.

The boycott over the system known as Thaad had a critical impact on Korea’s cosmetics industry, which heavily depended on Chinese consumers.