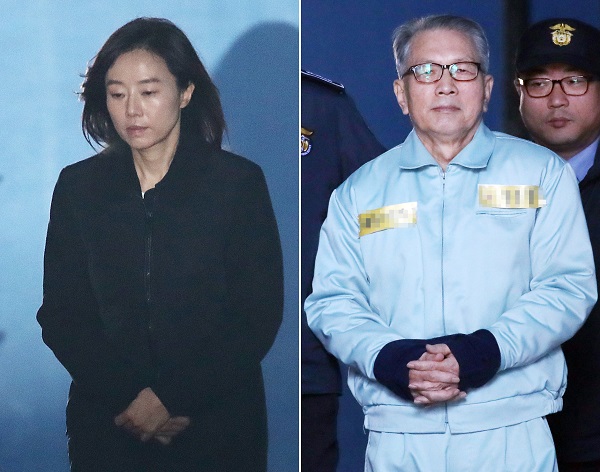 Two top members of the Park Geun-hye administration were sent to jail Tuesday for abuse of power.

The Seoul High Court on Tuesday ruled that Kim Ki-choon, Park’s former presidential chief of staff, and Cho Yoon-sun, former culture minister, were guilty of running a black list of artists and cultural figures critical of the administration that denied them funding and other opportunities. The court made clear that Park, impeached and ousted in March 2017, was a co-conspirator in the crimes.

Kim was sentenced to a four-year prison term, one year longer than imposed in his first trial. Last July, the Seoul Central District Court convicted Kim of abuse of power, coercion and perjury.

The appeals court also convicted Kim of having used his power to purge a senior public servant, overturning the lower court’s acquittal on that charge.

The high court Tuesday overturned Cho’s July acquittal and convicted her of abuse of power, coercion and perjury and sentenced her to two years in jail.

Although Cho was indicted on the same charges as Kim, the Seoul Central District Court only found her guilty of perjury in July. She was given a one-year suspended prison term with two years of probation.

After July’s verdict, Cho was released from the detention center, where she was jailed throughout her investigation and trial. Immediately after sentencing Tuesday, Cho was taken into custody and sent to prison. Kim had been detained since last January.
It was not immediately known whether Kim and Cho will appeal to the Supreme Court.

Independent counsel Park Young-soo investigated an allegation that the Park administration drew up a blacklist of cultural figures critical of the president and deprived them of funding and other opportunities.

Cho and Kim were key associates of the ousted president. Cho was Park’s senior political secretary from 2014 to 2015 and was appointed culture minister in 2016. She stepped down on Jan. 21, 2017 after investigators arrested her.
Kim served as Blue House chief of staff from 2013 to 2015.

Park is standing trial on various charges such as receiving bribes and abuse of power.
When the Seoul Central District Court made the initial rulings on Kim and Cho’s case in July, it did not recognize a conspiracy between Park and the aides because, it said, the policy to discriminate against left-wing artists and support rightists could not be seen as a legal violation.

The high court overturned that judgment and made clear that Park was a co-conspirator of Kim and Cho. It said the administration’s discrimination against artists on the blacklist was carried out step by step after Park established the policy, received briefings about plans to oppress them and approved those measures.

“Taking into account the circumstances, Park’s action is more than a simple declaration to endorse a policy that cuts support for left-wing artists and expands assistance to the right-wing,” the court said. “She abused her power as the highest decision-maker in state affairs, and at the same time, she conspired with her aides’ abuse of their powers. She, therefore, is responsible as a principal offender in this conspiracy.”