‘Harmony and convergence’ are Olympic themes

‘Harmony and convergence’ are Olympic themes 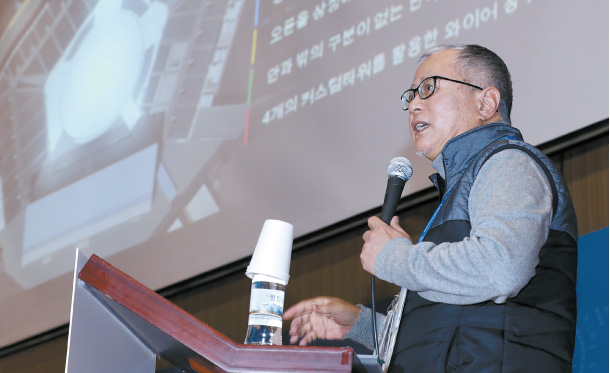 Song Seung-hwan, executive creative director of the ceremonies, announces the themes of the opening and closing ceremonies of the upcoming Winter Olympics at a press briefing in Pyeongchang County, Gangwon, on Tuesday. [Yonhap]

The main themes of the opening and closing ceremonies for the upcoming Winter Olympics, as well as weather forecasts and transportation, were announced on Tuesday by the PyeongChang Organizing Committee for the 2018 Olympic & Paralympic Games (Pocog).

“Harmony and convergence” are the overall themes, said Song Seung-hwan, executive creative director of the ceremonies, who added that these will be used to express a message of “passion and peace.”

The concept of harmony will be portrayed during both ceremonies with a performance that blends traditional and modern Korean culture. The ceremony will begin with a story about five children who will take a journey through Korea’s history. According to opening ceremony executive producer Yang Jung-woong, “The opening ceremony will weave together the narratives of five lovable protagonists from Gangwon Province.”

The theme of the closing ceremony is “Next Wave,” meant to convey the idea that although the PyeongChang Olympics have ended, the dreams of its athletes will continue. “It will be performed in an omnibus format,” said Yang Yu-jung, executive producer of closing ceremony, “where the music, dance, art and visuals are not too traditional nor too modern.”

Unlike previous Winter Olympics, where the opening and closing ceremonies are held at a World Cup Stadium or other pre-existing venues, Pocog constructed a new stadium this time. The spectator seats are set in a pentagon shape to represent the five rings of the Olympic flag and to compactly arrange seats so that spectators can be closer to the stage.

Although peace is a major theme at these Games, Song made it clear that this is not the result of North Korea’s participation. “Since we decided on the theme of peace long ago,” Song said, “nothing changed when we heard about North Korea’s participation other than the decision for the two Koreas to walk together under a unified flag and to change the music to ‘Arirang’.”

Pocog also announced their plan for cold weather conditions, as the temperature could possibly drop to negative 4.5 degrees Celsius (23.9 degrees Fahrenheit) on the day of the ceremony. Since the stadium does not have a roof, Pocog has installed a plastic fence to help block wind.

“To avoid hypothermia, we have installed 18 heated rest areas,” said Kim Dae-hyun, director general of culture and ceremonies for the organizing committee. “We also plan on installing 40 portable heaters in the aisles [of the stadium.]”

In addition to ponchos, knee blankets and heated sitting cushions, spectators will be given two additional heating pads. Another medical office will also be added, bringing the total to five, and visitors will not be required to remove their coats while going through security. A transportation app called “Go PyeongChang” is now available, which includes a map and information about bus or train tickets.