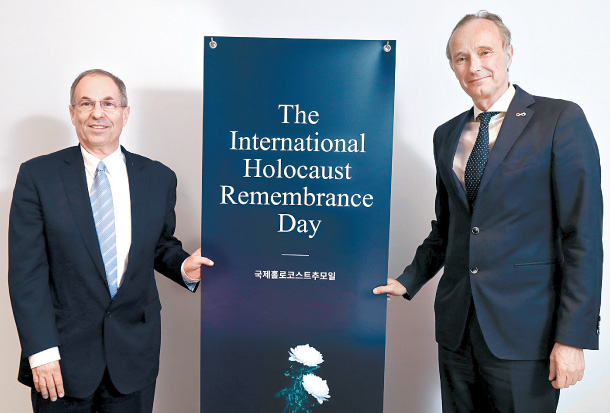 The ambassadors of Germany and Israel in Korea, who are hosting Culture Week on the Holocaust this week in commemoration of International Holocaust Remembrance Day, have said that bilateral reconciliation over past atrocities is not accomplished with a single apology but a continued course of exchanges.

“The rapprochement shouldn’t be a project of the elites,” said German Ambassador Stephan Auer. “After all, it’s a feeling, and a feeling can only be expressed when it’s from the people. Either this feeling turns toward the positive or it doesn’t, and if it doesn’t, then the reconciliation is just on paper.”

“Actually the [German] apology was reflected by a lot of deeds and activities,” said Israeli Ambassador Chaim Choshen. “It was not only an apology. A lot of things have been done by the German government for reconciliation .?.?. This is the process that took years.”

The following is an excerpt from the interview with the two ambassadors at Goethe-Institut Korea in central Seoul on Monday.

Q. How did the two embassies come to host Culture Week on the Holocaust in Seoul?

A. Chaim Choshen: If I am not mistaken, the Israeli Embassy initiated it a few years ago and approached the German Embassy, which reacted positively immediately. This is the second time we are hosting the event together in Korea.

Stephan Auer: We are grateful to friends from the Israeli Embassy who have approached us. Because I think it is a common duty to remember jointly the atrocities committed in the name of Germany, to have a common understanding of the past. Because it is only on that basis that we can also build a future, I think that is the most important message of this event.

From the German perspective, isn’t it difficult to repeatedly remember and apologize for past atrocities?

Auer: Of course it is not comfortable. But it is necessary. Whether we like it or not, we do it because it is part of the basic fundamental pillars of the Federal Republic of Germany. It belongs to our past, we cannot eradicate it, and we have to address that together with our Israeli friends. Second thing I wanted to say is that we have a historical responsibility to remember so that this genocide doesn’t repeat itself. This is a duty we have. And Chancellor Angela Merkel also reaffirmed our commitment to Israel’s security.

If I may add something, reconciliation and rapprochement between Germans and Israelis would not have been possible without the extended hand of the Israeli government and the Jewish people, and we are very, very humbled and very grateful to the victims who have extended their hands to the country of the perpetrators.

For the Israelis who accepted the apology, what made the German apology genuine?

Choshen: Actually the [German] apology was reflected by a lot of deeds and activities. It was not only an apology. A lot of things have been done by the German government for reconciliation. A lot of compensation was paid to Israel. A lot of compensations are still being paid. There are many commemoration sites in Germany. A lot of concentration camps became memorial sites. There are exchanges of youths and twin cities. This is a process that took years.

And today, I think Germany is maybe the most intimate friend of Israel in Europe. We have annual consultations between the two governments and we are assisted by the German government in defense.

How did the Israeli government cope with those opposing the bilateral reparations agreement in 1952?

Choshen: It was not really easy to convince the people to accept it. There were huge demonstrations in Israel. And today for some people, it’s still not easy, because there are victims of the Holocaust still living and there are some people who still today are not ready to visit Germany or buy German products. I don’t think that we try, or should try to persuade or convince somebody to forgive. If this is what they feel, then that’s what they feel.

The Japan-Korea 2015 agreement on the so-called comfort women issue continues to face strong opposition in Korea. Do you have any advice for the two countries in reaching reconciliation?

Choshen: I feel that it’s very difficult for me as an ambassador to advise the Korean government or the Japanese government on how to deal with the issue. I can say this, that it was definitely a great wrongdoing, this issue of comfort women was terrible, my heart and sympathy is with the Korean people and it’s also understandable that some people find it difficult to accept an agreement that has been signed between the two governments. I think it is very important for the two countries to settle the issue between them in a very friendly manner and to come to full reconciliation. Germany and Israel did it in spite of difficulties, and I wish the same will happen between Korea and Japan.

Auer: What the Germans did is unparalleled in history, you cannot compare these events. But if there is one lesson from German-Israeli history, it’s that there are several prerequisites for reconciliation - first is the extended hand of the victims, second is the preparedness on the part of the perpetrators to accept responsibility, and third is of course the support of the vast majority of the population.

And then of course you need time. You cannot convince people who have had tragic experiences. You need time to heal the wounds and you can’t force people to forgive. But you can try at least, in all honesty, to understand the other’s position .?.?. The rapprochement shouldn’t be a project of the elites. After all, it’s a feeling, and a feeling can only be expressed when it’s from the people. Either this feeling turns toward the positive or it doesn’t, and if it doesn’t, then the reconciliation is just on paper.

Is there a bilateral agreement on how to educate the young on the Holocaust?

Auer: There was an agreement signed between the German side and the Israeli government five years ago on teaching about the Holocaust. .?.?. While I didn’t experience it personally, as I was born after the Holocaust, my mother did when Nazi Germany occupied Czechoslovakia where she lived. She survived the Holocaust, and after the war, as a German, was expelled from Czechoslovakia and settled in Regensburg in Bavaria, her new home. Ten years after the war, she joined the Foreign Office of the new Federal Republic of Germany, a sign of trust in the new Germany and its institutions. This, and the fact that we spoke very openly at home about her experience and that of her family, was very important to cope with the past and it encouraged me, by the way, also to join the German Foreign Office.

Choshen: As for my personal experience, my son was in middle school a few years back and he participated in a school program in agreement with a certain region in northern Germany, which included a home stay with a German family. So he stayed with the family’s teenagers, who in a couple of months came to stay in our house in Israel. And I know that many schools in Israel have the same program for Israeli and German kids to learn about the Holocaust together.