Error costs speed skater her place at the Games

Error costs speed skater her place at the Games

An administrative oversight has cost a Korean speed skater a spot in next month’s PyeongChang Winter Olympics. 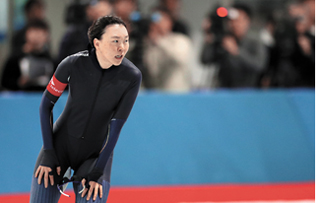 Noh Seon-yeong checks her time after completing a race during the National Distance Speed Skating Championships in Seoul in October, 2017. [YONHAP]

The Korea Skating Union (KSU) said Tuesday that Noh Seon-yeong, initially picked to represent the host country in the women’s team pursuit event, will be ineligible for the competition.

At the national Olympic trials last October, Noh was selected, along with Kim Bo-reum and Park Ji-woo, for the team pursuit. As the host country, Korea received an automatic spot in the team pursuit.

But under the Olympic qualification rules by the International Skating Union (ISU), all skaters competing in team pursuit must also have qualified for at least one individual race. While Kim and Park also earned Olympic berths in the mass start based on their performances during the ISU World Cup season, Noh only made the reserve list in the women’s 1,500 meters.

An official at the KSU claimed there was a mix-up in communication with the ISU, saying the Korean federation was only belatedly informed that all skaters in the team pursuit must also have qualified for an individual event.

The official said the KSU sent an email to the ISU to complain about the confusion. Noh received the news of her ineligibility on Saturday.

Korea will now have to scramble to fill Noh’s absence in the 2,400-meter race.

Three skaters who have individual Olympic spots are Lee Sang-hwa, Park Seung-hi and Kim Hyun-yung. They’re all short-distance specialists, and they won’t have nearly enough time to develop chemistry with Kim Bo-reum and Park Ji-woo anyway. Lee Sang-hwa isn’t really an option because she will be contending for her third straight gold medal in the 500 meters.

“This is a pretty bad situation, but we’ll try to prepare for the Olympics the best we can,” said national speed skating head coach Baek Chul-gi. “We’ll pick either Park Seung-hi or Kim Hyun-yung to compete in the team pursuit.”

Noh is an older sister of former short track star Noh Jin-kyu, who died of bone cancer in 2016. When she was selected for the national team, Noh Seon-yeong spoke of her desire to dedicate her Olympic performance to her late brother.